Along with the Gods is deceptively good. Not being an expert on Buddhism or the afterlife, I can only relate that what is presented it consistently intriguing. It pulls the viewer along into an emotional crescendo that belies the simple concept of “do good, get rewarded.” 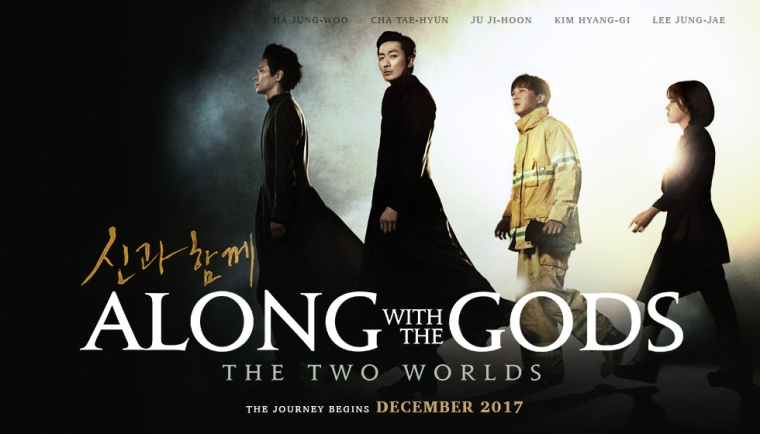 My experience with Asian cinema thus far is limited. Even so, I have enjoyed much of what I have seen. A good Asian cinematic film, like Train to Busan gives culture, action and excitement, even if there are a few too many squealing teens for me. The best, like Crouching Tiger, Hidden Dragon, opens up a world of possibility. Along with the Gods: The Two Worlds is definitely in the latter group.

The story starts out explaining about the Buddhist belief of afterlife. In this version, a valiant young firefighter named Kim Ja-hong (Tae-hyun) is brought to his end in a heroic effort to save the life of a young girl. There to meet him at the door to the afterlife are two of three guardians: Haewonmak (Ji-hoon) and Dukchun (Hyang-gi). The guardian’s role is made clear immediately. Ja-hong is perceived to be a paragon of virtue, and therefore a prime candidate for reincarnation.

The candidate, Ja-hong must go through seven trials over the span of 49 days in order to ascertain his worthiness to come back. This takes place in a series of locations with names like Murder Hell, Blade Forest and Volcano of the Damned. The evaluations seem a little too pat and cute for the first few rounds. By the time one settles in for a routine soft fantasy entry, things take a turn towards interesting.

Where the third guardian – Gang-rim – becomes integral to the rest of this development. Being the senior member of the trio, he has more experience, more responsibilities, and the ability to think outside of the box of rules the participants have been granted. Gang-rim, played with stoic fortitude by Jung-woo, begins to understand that there is a malevolent spirit at work in the form of a soul that refuses to move into the afterlife. Who this spirit is and how it connects to our prospective paragon provides an excellent turn of events for the viewer.

Not being an expert on Buddhism or the afterlife, I can only relate that what is presented it consistently intriguing. It pulls the viewer along into an emotional crescendo that belies the simple concept of “do good, get rewarded.”

The acting is good, taking into account the exchange rate on emotional reaction from South Korean to Western Culture. It’s a mixture of silly and serious that takes time for one to acclimate themselves. The film leaves itself plenty of room for the sequels to follow.

The creature effects shots are not always effective as one would hope. While not completely hokey, the overreach is obvious at times. This is not really a film one goes to for effects, however. There is a deeper level that is being sought here. One rarely touched on in Western culture cinema.

Let’s hope they up the ante. When they do, I hope I can keep up. This is the first step in a beautiful world.