Skip to content
Sicario: Day of the Soldado (****) clears the debris of politics
4 Stars

Sicario: Day of the Soldado (****) clears the debris of politics

Anyone who is used to Taylor Sheridan knows how this will turn out…and that fact doesn’t make watching it any easier. His eternal message: in a world filled with brutality, expect more of the same. 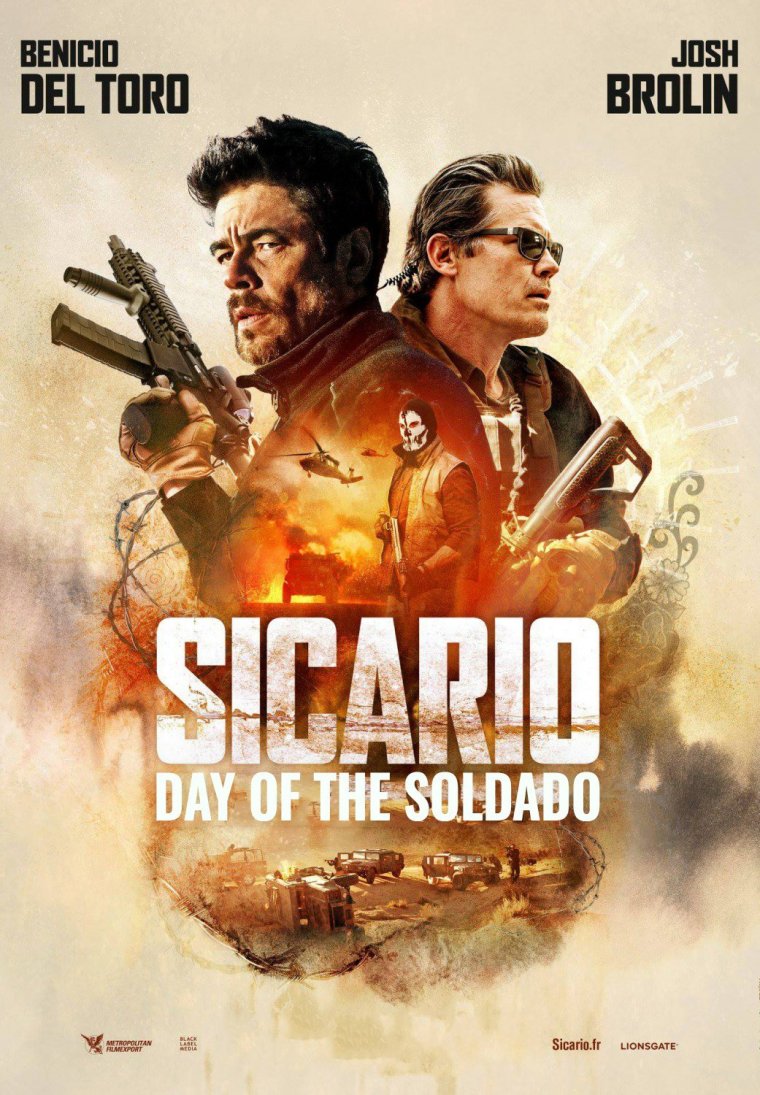 Sicario: Day of the Soldado

There is a scene at the beginning of Sicario: Day of the Soldado when a mother stands with her child in the midst of a tragedy. She asks a terrorist who is praying to Allah for mercy. Anyone who is used to Taylor Sheridan knows how this will turn out…and that fact doesn’t make watching it any easier. His eternal message: in a world filled with brutality, expect more of the same.

As the stakes are immediately raised at the beginning of the story, I am brought to mind of Clancy’s Clear and Present Danger. America has been hurt, and they want to strike back. They want war.

“On who?” asks their weapon, Matt Graver (Brolin).

The answer is simple.

The war on everyone starts out as a strike on the leader of a Mexican cartel. They kidnap one of his daughters with the intention of making it look like another cartel made the hit. The person leading the way in this mission is former lawyer and current disgruntled agent Alejandro Gillick (del Toro).

Gillick, who is the primary driver counter to Blunt’s agent in the first film, is brought in for his knowledge, ability to infiltrate and the fact that he’s been perfected as an instrument by Graver.

Things work well, until they involve the Mexican government. Then they go sideways in a way that feels as contrived as it is exciting. The purpose of this turn of events is so we can separate Gillick and the target princess (Moner) from the rest of the pack. Then we have the driver for the third act.

Sheridan doesn’t waste his characters. He gives even the minor roles moments of relevance. That none of the actors make blatantly stupid decisions helps us feel the stakes more than we should.

Moner figures out the score and this gives her some meaningful scenes with del Toro. It helps that he doesn’t treat her like an irrelevant child, but he doesn’t put her in charge, either. This role is a plumb one for del Toro, as he moves forward with vicious deliberation. He doesn’t give it all away. He never would.

Brolin is having a good summer. He hit it big as Thanos, then he nailed the spirit of Cable as a great counter to Deadpool. This may be his best performance of the year, though. His Graver is a shadow in Gillick’s past, an ally in his present. We’re not sure what he will be in the future, but we know that he does value him.

Sheridan does a good job avoiding many of the tropes we might see in the odd couple portion of the film. If you think you know what’s going to happen, you might. Chances are, though, you won’t see every turn.

Sollima and Dariusz Wolski may not have the pedigree of Villeneuve and Deakins, but their pretty damn close when it comes to matching the feeling of desperation and hopelessness when realizing the border is swiss cheese. The commodity has moved from drugs to people, but it doesn’t mean we see the individuals valued as more than “sheep.” Whether intentionally or not, Sheridan has created an almost perfectly balanced encapsulation of our times. Once you remove the politics from the situation, it becomes pretty clear. It’s brutal.

And expect more of the same.