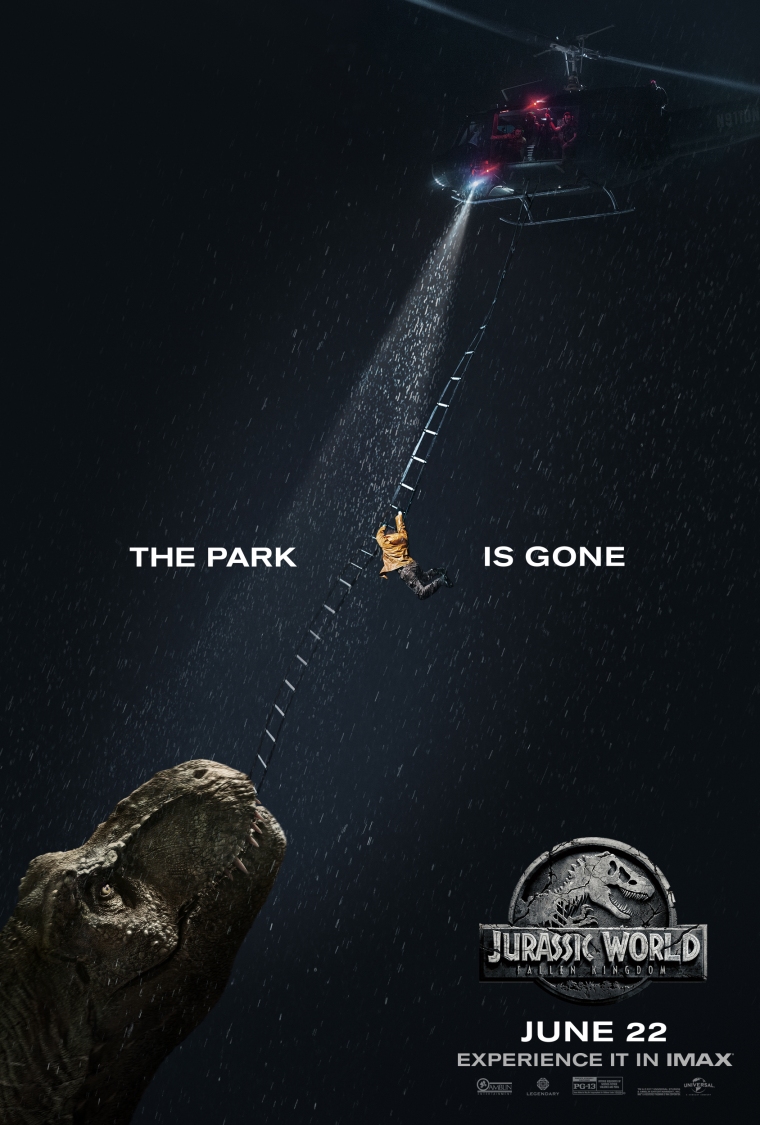 If there’s one line to describe the story and script of this 5th entry in the Jurassic series, Jeff Goldblum delivers:

“Of course that’s going to be catastrophic.”

There is little in the way of intentional wit or suspense that works in this excuse to put dinosaurs on-screen as helpless humans scream and wait to be picked off en masse. The characters are all of three camps. Either they are valiant, charitable,  working class underdogs or they are greedy, opulent bastards or they are older award-winning actors waiting to be set to the sideline.

That this film works better than the original might be that director Bayona does a better job playing variations of the greatest hits of the series action scenes than any of the other sequels. Pushing Howard, Pratt and company through a creepy old house version of an obstacle course, he manages to get around the completely inept plot that seems more built around those same obstacle course scenes.  Then he also fits in the occasional looming disaster with just the right cutoff.

In tow is Isabella Sermon, who plays Hammond’s heretofore unmentioned partner Lockwood’s granddaughter…or something. I can tell you she looks like a young clone of my beautiful niece Sofia. So naturally I think she’s great.

Almost as nice are Justice Smith and Daniella Pineda as the computer nerd and sassy doctor required to add “character” to scenes in which they are not being functional. Smith, in particular, is a screamer.

Ted Levine is wasted in the same role of brutal handler that seems to waste every decent actor in the series playing the role, except Bob Peck’s Muldoon. The stupid people dying quotient is as high here as it is in The Lost World, only this time it’s a bunch of stuffy rich folk in the mix.

At this point the film has all of the significance of The Transformers, with better special effects. That they don’t make an effort to create characters that we can remember is more a fault of Trevarrow and Connolly’s complete unwillingness to do anything more than have them placed in situations where they do more than scream, scramble and call for Blue.

Anyone who’s seen the original can tell you things about all of the characters. What they liked, what they believed and why they were there. All this was before we ever saw a dinosaur. Bryce Dallas Howard and Chris Pratt get no favors from the script, because we don’t know any more about them than we did staying with them through the whole first film. Well, except Pratt’s Owen is friends with Blue, when he isn’t deciding that she should be allowed to die.

Poor Blue. The former menace species of the classic first movie, the lone remaining raptor is little more than a lost puppy in this film. No matter what happens, she always comes to the aid of Owen and his band of evacuees.

Ultimately, that’s just another in the line of problems inherent to this assembly of scenes meant to make us jump on occasion. We know the same raptor and the same old T Rex will save the day. We don’t really know why, though. Or what direction they’ll jump onscreen from.

So we got that going for us.