Nothing I say here will likely prevent you from seeing this film. That’s fine. It works sort of hard sometimes (very few, really) to entertain. It is definitely a likable venture.

If I can save you a few bucks on the Imax price, my job is done. If I had run out of steam on this review a little earlier, I probably could have strengthened the script. I would need my kids to fix the special effects, though. 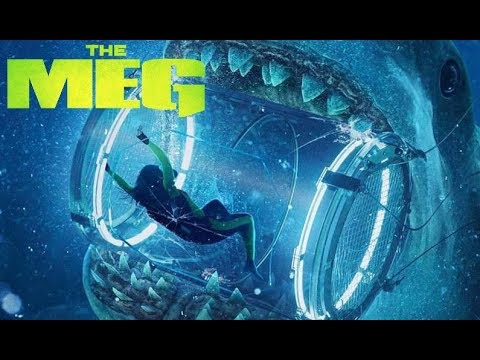 It’s been a long time in coming, but Steve Alten’s 1997 book Meg has finally been converted into an IMAX film, called The Meg. Why it was chosen to be shown in this format, should be obvious: everybody seeing it more than likely wishes that they would have seen Jaws in the same format. That this film, made almost 45 years after the Spielberg classic, is not worthy of the format is intuitive. The effects, though modern, are not necessarily created as they are just flopped out there, like a fish at the bottom of a boat, looking for a breath. Are they bad? It’s not as much that they are bad. They are passable. A step above SyFy, a few steps below inspired.

The story is a fun one, at least conceptually. A scientist believes he’s found a trench below the lowest point in the ocean. It’s a place that was so cold, the chill held down a layer below, heated by volcanic fissures. All sorts of life lives down in this area, trapped in a giant heated valley. It’s a lost world that somehow ignores the water pressure and lack of light.

The reasons this is important lay in the fact the predator of the title, an ancient Megalodon is drawn to bright lights when we first experience him. That is, when he’s not chomping down on a giant squid that is completely encompassing the light.

Jonas Taylor (Statham) is a five years broken, drunken man who, after he takes off a layer of clothes is completely sober and in perfect health and physical form. The reason for his woe is his decision to leave a couple of friends behind during a rescue mission. He swears that saving them would have killed the other 11 people. He also believes the downed submersible is the result of a deep sea monster attack. The doctor (Taylor) who is among those he saved, is also among his doubters. The doctor has no proof to the contrary, but what the hell. The reason for this doubt is to create exposition and moments of understanding later. It’s the kind of thing that results in a knowing glance and a sacrifice by the doubter later. If this is a spoiler for you, then finish watching any disaster movie before seeing this and you’ll feel educated enough to proceed.

Taylor is brought back to action for “one final job” because his ex-wife is among those needing rescue. That this rescue happens in the first 1/3 of the film should make the question of its success more assured. That his ex spend much of her time trying to convince Taylor to hit on one of her colleagues is a little harder to believe, much less understand. At least it’s original.

The dialogue is something between Attack of the Clones and House of 1000 Corpses. This may be because Wilson is present and he tries pretty hard to be funny. Sometimes he makes me smile, but a lot of that is because I will always appreciate Dwight. The benefits of having poorly acted characters and dialogue that is more than occasionally “south of the line” of awful are many. It gives one people to root against. It’s almost like seeing Katharine McPhee jump up in front of the lens.

Immediately one thinks, “Please kill it before we hear another line!”

Many of these characters meet their demise. Hero’s Oka bites it early (pun poorly conceived and intended), but his buddy takes too long to end up…where the hell did he go?

One of the big sins of The Meg is there are many deaths that seem to be the result of collateral damage.

When something has a mouth big enough to eat a mid sized yacht, it’s going to be hard to see a lot of blood. More often than not, we don’t see a lot of the characters go down the gullet, and mostly just assume they got an errant fin, because we don’t see this either.

There are a few good, if not incredibly well shot scenes. The one for the poster above, with the shark cage being swallowed whole, makes little sense, but once more, it’s something I have not seen before.

Turtletaub has only done better work a few times, and that’s a shame. My heart always brings me back to Phenomenon when I hear his name. I don’t lose hope when I realize he did both National Treasure films. There’s plenty on the resume that makes this film look like a winner, unfortunately.

There are plenty of views that stretch credibility for just the basic stuff. Like the time when the whale sized predator cruises under everyone in the wading area. How many people wade in waters 30 feet deep?

Not me, but then I am not a good swimmer. And I’d probably get cramps and need my wife to swim me around, like she did on our honeymoon.

Nothing I say here will likely prevent you from seeing this film. That’s fine. It works sort of hard sometimes (very few, really) to entertain. It is definitely a likable venture.

If I can save you a few bucks on the Imax price, my job is done. If I had run out of steam on this review a little earlier, it still could probably have doubled for the script. I would need my kids to fix the special effects, though.