Marking the release of Toy Story 3 marking the release of the 11th Pixar Film, I thought it was an obvious point for a review of the series.  Each one of these films has been a classic or near masterpiece and the best animated film of the year.  With that kind of track record, can one differentiate them?  I think you can, and here we go (in order of least magnificent to most magnificent):

Advances:  This movie has tons of personality, and the chemistry between Sally and Lightning McQueen is sweet.  Paul Newman found a perfect way to round out his magnificent career.  The cinematography is flawless.

Drawbacks:  Larry “The Cable Guy” doesn’t hold up after repeated viewings.  His vocal range is somewhere in the wiffle ball area.  Throughout the film, I kept feeling the need to pick things up with my hands, attached to the end of my arms.

Advances: An even richer cast of characters benefits from great vocal work (Ellen DeGeneres and Willem Defoe, in particular) and even better animation. Highest grossing Pixar film has long been given an assumed role near the top of the list of the company’s movies.

Drawbacks:  It spends most of its time on the shelf at our house, though.  Albert Brooks as a clown fish is still…Albert Brooks.  His neuroses makes one want to get captured and thrown in a fish tank at a Dentist’s office.  Cheap shot about Americans is dumb.

Advances: Sad and beautiful silent first third of the film shows that storytelling need not be full of explosions, lasers and wisecracks to be effective on a visceral level.  The romance of Eve and WALL-E is top-notch.  I will never look at Hello Dolly the same way again.

Drawbacks:  Biggest complaint about this film is the simplistic premise that insinuates that, essentially, shopping at Walmart leads to planetary destruction.  Certainly Pixar appreciated the millions of dollars that came from Walmart in terms of DVD, toy and other merchandise sales.

Advances:  The diamond in the open in the Pixar repertoire.  This film is unfairly

forgotten, I believe.  A Bug’s Life has two wonderful messages.  The first  is everyone has something to contribute.  The second, bullies often have no power over the seemingly powerless, if they work together.  The favorite scene for me is the twin pill bugs, Tuck and Roll shouting “You’re Fired!” at each other, but I will take a poo-poo platter in a pinch.  Vocal work is excellent here, Kevin Spacey, Dave Foley, Richard Kind, Denis Leary and (again) Bonnie Hunt in particular.

Drawbacks: For me, there aren’t many things here to be critical of.  The story is solid and the animation is brilliant.  Is that a drawback?  Only for those who would prefer Ewoks over Empire Strikes Back.

Drawbacks: What does it say that the one that started it all ranks 6th?  Sid’s dog, in comparison to Remy or Sully, is seriously lacking.  The faces of the humans have improved much in later films too.

Advances: The story is better, and the animation so extreme, I threw up in 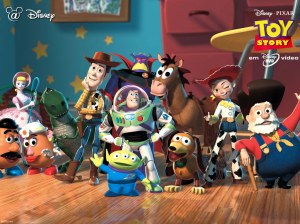 my throat when a sleeping Al burped his Cheeto breath in Woody’s face.  Jessie is my children’s’ favorite character, and it’s no wonder, easy as it is for kids to identify with the fear of being left behind.  In four short years since the release of the first film, this one was at once cohesive and an advancement in the technology.

Annoyances: At this point, there are no drawbacks.  Not many annoyances, either.  So I will just say I have never been a Tim Allen fan and leave it at that.

Advancements: Sully’s fur is so soft and fluffy, I can almost feel it through

my eyes.  Best voice work to date, and Boo is the cutest child in movie history.  The concept of monsters being scared of children is an ironic gem.

Annoyances: Can one ever get tired of Billy Crystal?  Almost.  I am really reaching at this point.  Someone stop me.

Advances: Edna, voiced by director Brad Bird, is the best Pixar character in history.  The theme and story here are wonderful.  Jason Lee’s Syndrome is delightfully wicked, presenting the chance at real harm for the first time in the history of Pixar.  Samuel L. Jackson is as cool in animated form (Frozone) as in any other.  There is not a mis-step in this film.

Annoyances:  Why don’t I care that this is just another version of the Fantastic Four?  Oh, that’s right, Jessica Alba.

Advances:  Absolutely incredibly moving story is told within the first 10 minutes…and then another vastly amazing story begins!  Carl, Russell, Dug and Kevin are the best combination of characters in a Pixar film.  I really don’t know how they can continue to top themselves.  My kids know every one of the words in the script, but even they prefer the part without words.

I can’t cook.  I am not a fan of the French.  Why should I like this movie?  This movie makes me want to cook in France…with a Rat.  Remy’s sense of smell of smell is so strong, it overrides his will to live.  The escape scene from the restaurant in which he stops in his tracks  to repair a soup is a priceless joy to behold.  This movie actually gets better with repeated viewings.  This movie is one of the best movies of the last 25 years, not just Pixar.

To be fair, my opinion is not the end all be all.  In this house, 2 of the 3 females offered their own versions of this list.

It’s so much fun going through these films, it would be great to get your opinion, too.  Please feel free to respond with your own list.