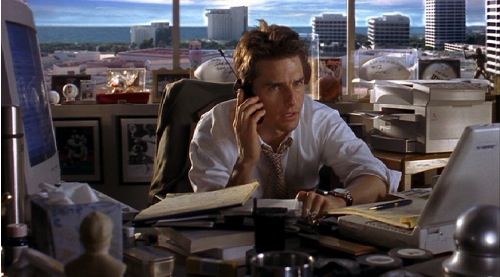 Written and Directed by – Cameron Crowe

Listening to the podcast Mohr Stories earlier in the week and I was reminded of this movie.  In describing his auditions with himself and Tom Cruise, Jay Mohr portrayed Tom Cruise in terms of intensity and friendliness.  On his first day of filming, Mohr is immediately thrust into the crucial scene: the firing.  While they are filming, Mohr is intense and focused.  Looking at Cruise, he sees the same intensity.  Just out of camera range, he see’s Cruise gesturing wildly, all the while, keeping the parts of him in the camera’s frame as still as possible.  Upon catching that the Cruise’s gestures were for him, he saw immediately that Cruise’s recommendation was a good one, and changed course.  Cruise then gave a thumbs up and the slightest wink of approval.  His intensity was only matched by his intent.  Mohr’s success was his success, sure, but it was more than that.  Working with Cruise, Mohr said, was a life changing helping hand at a crucial time in his life, and he will never forget it.

Everyone knows the story of Jerry Maguire by now; an agent suddenly grows a conscience, and is subsequently fired by his firm, replaced by a younger, less conscientious version of himself, and then left with one client.  This is the true test: fewer clients, less money, more honesty.  Along the way, he picks up a person devoted to his message…and him.  This accountant leaves with him the day of his firing and becomes his employee, and shortly afterwards, his wife.  His client, Rod Tidwell, goes from being an irritant to a friend.  There are still plenty of things to work out, but once they get past the external and internal barriers, its smooth sailing.

Cruise’s portrayal is a turning point in his career.  He had done plenty of films about the cocky guy humbled in the end.  What if the cocky guy starts with humility by the time the opening credits finish rolling?  What if developing the conscience and humility leads to a couple of stern slaps across the chops by reality?  What if he does the right thing, but not for the right reasons?  Crowe’s masterpiece asks all these questions and many more.  In the process, it becomes one of the wisest films of its generation. Along the way, we see flashbacks, in the form of Jerry’s mentor, Dicky Fox.  Fox’s statements are plaintive, simple salesman speak.  You know, the type you would get from the guys who remember the old days.  He stands as a beacon in Maguire’s life, guiding his choices and moving him from simple scheister to a complex man guided by love.

His friend, Rod (an Oscar-winning performance by Gooding, Jr.), moves from his role as instigator to someone with a wisdom that couched by kindness and love. The learning is not one-sided in any Cameron Crowe film, and here is no exception.  Cuba’s Tidwell has wise but not brilliant.  More importantly, he is not without the capacity for evolution and redemption.  Many people remember the loud moments of Rod Tidwell, undoubtedly due to Gooding, Jr.’s antics following his Oscar win.  Most people don’t mention the quiet moments, which help to round the performance out, fleshing out the feelings of tenderness as a husband and father, and the love of a player and a friend.

Cameron Crowe handles the subject deftly, with the assuredness of a sage man.  In only his third movie, (the first 2, Say Anything and Singles) as a director, and his fifth as a writer (add Fast Times at Ridgemont High and The Wild Life) shows his capacity to create well-rounded characters.  His characters have inspired thoughts and emotion, intrepid fears, mortal doubts and open minds.  Ever the optimist, his characters are often down, but rarely out.  His tempo is alternating.  There are moments of clarity, and moments 0f clouded judgement.  The latter are the moments when Dicky appears on-screen, like the conscience.  Ever the guide.

Who does this movie appeal to? 15 years later, it’s appeal is pretty universal.  There are the catch phrases, “You had me at ‘Hello,'” “Show me the money!” and “You complete me.”  These lines have been trivialized, but when watching the film, with its message, they retain their power, in the skill and heart of Crowe’s writing.  This is his message of love.  There is no more important film he will do, unless he figures out the mysteries of God and Heaven.  Here he is approaching it on a small level, which is the best place to start.

This is one of Cruise’s most accessible roles, and that is saying something.  He’s made a career of  showing flawed individuals, but this is the first time we’ve been allowed to see him grow so completely within a role.  There are fits and starts, he shows charisma and cluelessness, makes great decisions and follows them with poor ones.  Through it all, an essential goodness remains key to his character.  He knows what he should be doing, even if it isn’t always easy to do.  By focusing so effectively on the universal message of love in essence, this movie is relevant today as it was then.  And it will be 50 years from now.

The other players fare equally well.  As Dorothy Boyd, Zellweger gives a clear, sympathetic vision of a single mother in the ’90s.  Prepared to provide for her family, she is also, at 26, still young enough to be won over by idealism.  She has an innate wisdom that is tempered by her recognition and hope in potential.  To establish her as “knowing” is limiting, because she is on a journey, too.  Her journey measures other, smaller things, like the happiness of her little boy, Ray (played by the slightly cloying, but still somewhat adorable Lipnicki) and truth.  She sees both of these things in Jerry, and waits to see if he will see them in himself.  Her performance was a positive harbinger of things to come.  What gives her strength is her revealing her weakness.  Thank goodness she acquired this skill early on, as it serves her well here and in future masterpieces like Bridget Jones’…, White Oleander, and Cold Mountain.

As Bob Sugar, Mohr has created the consummate villain.  He understands everything in terms of strength and weakness.  The only subtext he sees is the bottom line.  That said, he has no comprehension as to why Tidwell and Jerry Maguire share that meaningful hug near the film’s end.  He knows what one looks like, but does not know what one feels like.  In a cutthroat world, all he understands is how to avoid the knife, while not really embracing what it means to live.

Jerry Maguire does not need my help selling itself as a film.  I am only here to say the ending sneaks up on me, just like everyone else, and brings me to tears of joy.  To paraphrase Lou Reed, life is good and not fair at all.  Dicky knew that, in a simpler way.  And still he kept a smile on his face.  Still, he was guided by love.