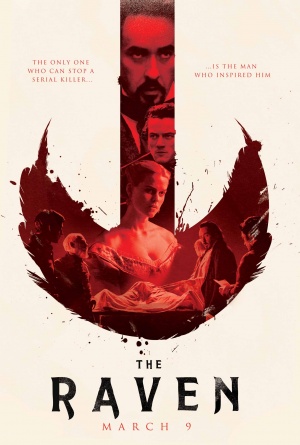 There is a movie here, a damn good one…somewhere.  Cusack bears a resemblance to Edgar Allan Poe and the idea of a true serial killing spree based on his macabre works is intriguing.  The execution of this film, however, is atrocious.  Stumbling along from scene to scene, there is absolutely no charisma exhibited by any of the characters.  The plot is a mess, albeit an inspired one.

Many actors were tied to and eventually passed on this project.  Jeremy Renner and Ewan McGregor as Inspector Fields and Joaquin Phoenix as Poe.  Could the film have been better with any of them in the role of the protagonists?  I doubt it.  The problems here are much more than acting could fix.

The script does not allow for any sense of development for any of the characters before the jarring events begin to reduce people into things.  This is perfectly exemplified by one of the scenes featuring Poe at a poetry reading.  In the midst of revealing an absurdly wonderful interpretation of a woman’s poem, he is brought in for questioning by the police. For the rest of the film, we have Poe just telling people how he is a “master of his art,” while those who would have no means to judge him otherwise just nod blankly in agreement.  In this way, Cusack has nothing to push back on.  His performance is muted, like shouting into a void.

Part of this void is the character of Inspector Fields, played with a bland acceptance by Luke Evans.  Evans is an actor with a limited range.  When used correctly like in The Three Musketeers, he is quite entertaining.  Here, he is more of a confused but willing child.  One never gets the sense of him as anything more than someone to be awed by the events. Because of this, there is no real sense of justice or authority to any of his actions, and no real belief that he has anything of a motive to just hang around in the presence of Poe.

The casting of Brendan Gleeson is a mystery to me.  What he can bring to a film is not in any way needed here.  His role could have been carried out by anyone, literally.  As Captain Hamilton, all he does is play a middle-aged guy concerned about his daughter.  There are no other layers. His daughter, Emily (Eve) provides a haunted presence through much of the film.  Indeed, she fits well within the framework of someone caught in the web of a Poe reflected-tale.

The rest of the cast is a nameless, ineffective group.  Seeing Cusack amble back and forth among them makes me wonder where it is his career has gone.  He has been a great actor in some absolute gems (Grosse Pointe Blank, Say Anything, Being John Malkovich, The Grifters), as well a solid contributor in some good films (Hot Tub Time Machine, High Fidelity, Con Air, Midnight in the Garden of Good and Evil) and the lead in some trash (Serendipity, America’s Sweethearts, Must Love Dogs).  Then there is this.  He’s done so many films in his career, there is no real sense of who he is as an actor.  He used to be relatively easy to identify with.  In this film, it feels like you are watching person you can’t quite remember.

Why is it, exactly, that he would take a role in an incomplete script such as this, when others without his résumé would avoid them?  Anyone who follows Cusack on Twitter (@johncusack) knows that he is one who is apt to spend many hours a night following his muse.  He is approaching 9,000 tweets with over 1,000,000 followers.  Describing himself as an “Apocalyptic shit disturber and elephant trainer,”  he is a reservoir of thought and feeling.  I guess you have to go where you think the money is, once in a while.  It isn’t here.

One thought on “The Raven: Is this John Cusack?”