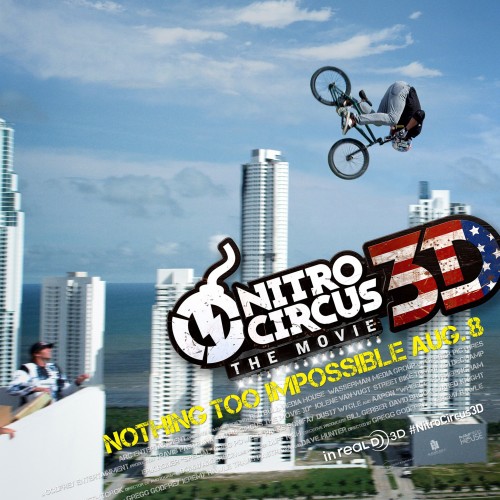 Almost 45 minutes into Nitro Circus: The Movie, there is a stunt where one of the guys attempts to roll a car more than “7 and 3/4 times.”  After seeing the slo-mo where we see the actual count, my wife looks at me and asks:

I have no answers.  I thought everyone had seen Dale Earnhardt, Sr.’s final moments in the finest NASCAR could offer at the time.  Whether there was more or less helpful tech in the Nitro Circus car, one could not say.  All I knew is the difference between life and death was in the balance strictly for the difference between 7 and 8.

Within 20 minutes, we then saw 2 members of the crew in a car again.  This time it was purely for purposes of flipping it over in a bigger, scarier ramp.  The ramp, made of wood, falls apart midway through the jump, and the landing goes wrong.  How it was supposed to go, I have no idea.  Jim DeChamp ended up with a broken back as a result.  He is expected to make a full recovery.

“It’s not like these guys are stupid,” my wife said, “But what the hell?”

True, the math involved in their shenanigans would be worth a master’s degree at M.I.T. in that they have to get it right all the time or…you know.  They do succeed a majority of the time, even if their success ends up giving multiple people concussions.

Early in the film we get to see Johnny Knoxville discuss the difference between his Jackass enterprise and Nitro Circus.  He loses words relatively early.  The best thing he can say is that there are more pranks on Jackass, and more speed in Nitro.  Another difference is that on a Friday night, I would rather spend time with the Nitro group.  There seems to be a lot less drugs and alcohol involved, and a much bigger potential for survival.

Some of the more unforgettable stunts take place on high rises in Panama.  I am not sure how they get the insurance for what they do, but without it, there’s no TV show, or movie. The support structure of the group seems pretty solid.  After every stunt they flock the stunt survivor and shower him or her with praise and attention.  They know when things go wrong very early, like with DeChamp.  They also know when it just hurts a little and their friend needs to feel like they have done what no one else could do.

Or would do.  During a rather large segment dedicated to a double flip on a big wheel, someone makes an astute observation.  The big wheels are souped up, and while it is incredible what they are doing, it’s a pretty big bet that no one else is even fathoming it.  It would never occur to someone to add reinforcements to a three-wheeled child’s toy.

There is much made about a show at the MGM Grand in Las Vegas, but it is really not much of a story.  It’s a facsimile of the Justin Bieber movie storyline about filling the Madison Square Garden, with a lot fewer screaming little girls in the crowd.

One will undoubtedly like this movie if they have a passing amusement for Jackass.  I like it more, for no other reason than I have grown tired of the way the people on Jackass treat themselves…and others.  The entertainment is disposable, in large part, but it’s got heart.

One thought on “Nitro Circus: The Movie Like Jackass, but faster”