Skip to content
Lawless shows everyone at the top of their game
4.5 Stars

Lawless shows everyone at the top of their game 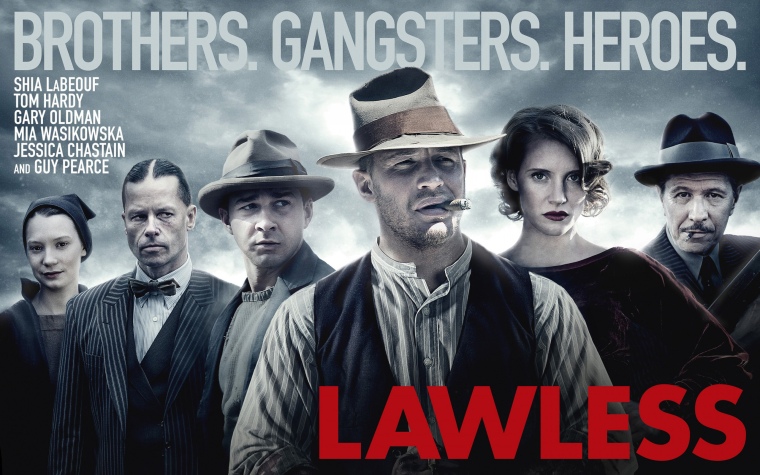 Lawless is one very rare movie indeed.  I can’t recall seeing a film where there are so many high-caliber actors who are doing what they do best.  Part of this is due to the freedom of having a great script and a fearless director.  Many times when one expects a cliché to pop up. we are met with the surprise of a world in our history, but not often shown so vividly.

The backdrop is historical Franklin County, Virginia, where the 3 Bondurant brothers carried on a bootlegging operation of epic proportions in the 1930’s.  The brothers, Jack (LaBeouf), Forrest (Hardy) and Howard (Clasrke) are fearless, determined and rumored to be invincible.  This is an assertion that is put to an extreme test. Jack is the more sensitive of the brothers, with his lack of experience often at odds with the leader and middle brother, Forrest.  Older brother Howard provides muscle and fortitude.  It’s a role that is generally a thankless one.  Clarke is a good actor of some renown in his native Australia, but the least known of the three.  Truly, this is usually the brother that always dies first.  Fortunately, this movie doesn’t go that way.

The film does have the girl seeking redemption, in the form of Maggie, played with a seductive frailty by Chastain.  Her very presence is like a wound with a smile.  If you aren’t paying attention, you would never see it.  Forrest sees this, of course, while he is busy missing other, more obvious signs.

Wasikowska is Bertha, a German Baptist Preacher’s daughter who is wooed by Jack.  Her portrayal is winsome, and somewhat rebellious.  This was another role that would have been easy to mail in, but like every other performance, it is not a wasted one.

Guy Pearce has been in two other Hillcoat films, The Proposition and The Road.Each time he comes out with a distinct character.   Here, as Special Deputy Charlie Rakes, his character is the most riveting of the movie.  Something of a cross between Priscilla, Queen of the Desert and J. Edgar Hoover, his monstrous trans gender wickedness looms like a shadow over the scenes he inhabits.  This shadow is countered, somewhat by the exuberance and power of the brothers.

Gary Oldman makes an appearance as a local legend, Floyd Banner.  He has few scenes, but he owns them.  His chameleon-like ability is movie star big, but normal as anyone you might meet.  He has few peers, some of them are in this film.

Hardy’s performance is subdued, almost to the point of paralysis.  It’s necessary, though, to counter the foolishness of his younger brother.  LaBeouf gives Jack everything the character needs.  His performance is fearless in his willingness to show Jack as a young, scared man who moves eventually to a man driven to stand with his brothers.  I thought so many big films (Transformers, Indiana Jones) would have made him a shameless cheese by now, but he brings the humility, as well as the joy.  Both brothers are given a dynamism with each other and the women that they pursue.  They are living and breathing history.

The characters that fill this story are brought to life by the uncanny wordsmithing of Cave and the wry direction of Hillcoat.  The chemistry of their past work together is clear here in the willingness to move off of the middle of the road stuff like Public Enemies.  They show things somewhat more for what they really may have been, as compared to the same crud we’ve seen before.  It’s not just a bunch of name actors dressing up and playing period.  It is an accomplishment.

The shootout of the finale has some basis in history, but it varies a bit from the actual events.  In the movie it was a staged confrontation that comes off effectively, almost like the classic scene from Matewan.  The event as reported was a bootlegging run that got caught on the same bridge.  It would have been more interesting, I think, if they had gone with what really happened, but it’s not bad at all.  Just not as good as it could be.

Hillcoat is an artist whose work gets more interesting with each watch.  He is moving up into Nichols, Nolan and Fincher territory.  One can’t help but look forward to the future, or even the past, as he presents it.