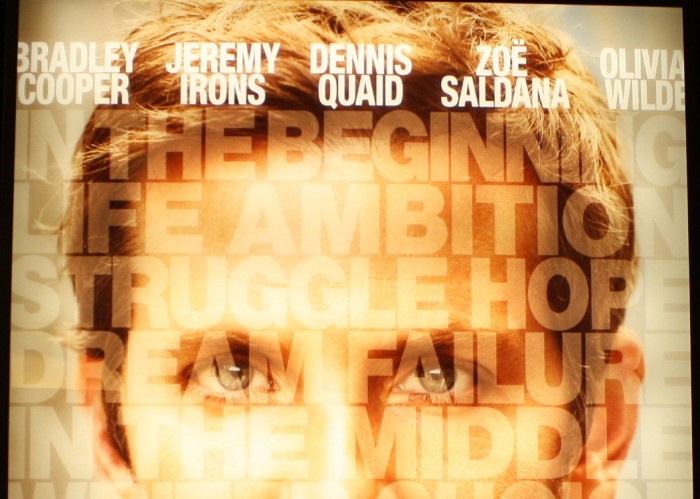 “…It ain’t winning or losing. Just the singing of the song…,” John Mellencamp, Mansions In Heaven

“…Rory Jansen had made his choice…,” Clayton Hammond

For Rory Jensen (Cooper), it starts with number 2 and, after a short pause, moves on to number 3.  As one who dabbles (some would say baubles) in the first area, the premise holds some intrigue.  The script goes out of its way to eliminate as much fault as possible.  They even point out that Rory has some real ability.  Essentially, he knows what the viewer knows.  He is guilty of the worst sort of artistic crime.

The way The Words plays out is from 3 different angles.  The first is that of an older author (Quaid) giving a reading of his latest hit book while being watched by a young college student (Wilde).  The second is the story he is telling about a young, struggling writer (the afore-mentioned Cooper) with his wife (Saldana).  In the third tale, we have a young serviceman (Barnes) in France with his young French bride (Arnezeder).  They intertwine around a story found in a small leather case.

The story is decently acted, and it moves along relatively predictably.  Standing out is Cooper, with his incredibly honest portrayal.  His face expresses so much honesty, one can’t help feeling sympathy for the predicament he faces, self-induced or not.  As someone who spends a lot of time churning out words, I find the portrayal of writers in general as one of honest feeling.  I can understand especially how much it means to Rory to follow through on the typing of each word, to get a feeling for the thought process.  Anyone who’s been absorbed by a writer like, say, Elmore Leonard, would understand.  I even get these pangs only watching Justified which is merely his characters written in his style by other authors.  One can’t help for feeling that it’s possible to become the man himself.

As much as I read into this, the rest of the story is generalized to the point that it is predictable.  This is not to say it is not enjoyable for a rainy day.  If my pastime allows for me to enjoy it more, well chalk it up to the way I spend my free time.  When it comes to my reasons for expressing myself in words, give me a number 1 and, if I am lucky, maybe a number 2.  In my small way, I am just writing on a cave, with no idea how permanent it is.  At least it’s my own thoughts and feelings.