Skip to content
Safe Haven: This is turning into a routine…
3 Stars

Safe Haven: This is turning into a routine… 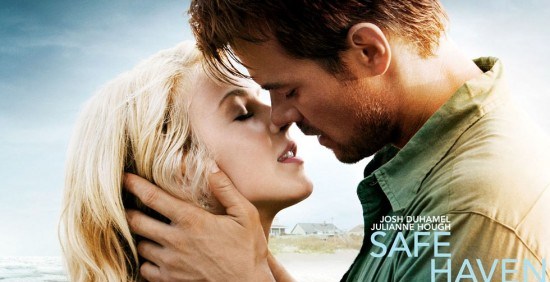 Lasse Hallström is a director with a past appealing to the ladies.  Starting off doing a bunch of ABBA videos and then ABBA: The Movie, he has had a career that moved between sentiment and yearning, without ever going as far as sappiness.  His high point for me is Hachi: A Dog’s Tale, which managed to take the perspective of a wordless puppy who wore his heart on his sleeve.

This movie has people in it, for the most part.  And their hearts are all over their sleeves, among other places.  That he subdues the melodrama that usually accompanies Sparks adaptations into a watchable meditation is a testament to the director, but also the casting of Duhamel with Hough.  There is a low key chemistry that is allowed to develop at a pace somewhat slower than usual in a romantic drama.  Hallström had less success with his first Sparks adaptation, Dear John.  The leads had less chemistry, and way too much drama to overcome.

This time we have spousal abuse, widowers, old folks who’ve lost their marbles and scenic coastal towns.  Oh, and there are kids.  Can’t forget the kids.  You know before we’re half way through the film that the two main characters will find their way to love again.  That this love will be tested goes without saying too.  Sparks’ success is not due to his original ideas.  It’s the touching of familiar parts of our sentiment, or the heart, as some might say.

Hough is a damn fine dancer for an actress.  She’s cutting her teeth, but easy on the eyes.  If one has difficulty buying the predicament she is in, at least she has that electric smile to convince us she’s happy.  If one does not see conflicted emotions with her character, at least she melds well with her counterpart.

I have yet to see a film in which Duhamel is not convincing as a romantic lead.  His ability surpasses the material almost every time out.  At least this time his director matches him every step of the way.

Everything in Sparks’ repetoire is well worn, like a radio station playing country songs.  The riff is familiar, and it leads us back to it whenever we need something comfortable to relate to, if not necessarily learn from.

Red West provides the fun old dude that we’ve come to expect from some of Sparks’ better works.  Cobie Smulders is interesting if only for the fact that we can hear her natural speaking voice instead of that drone she mistook for sounding tough in The Avengers.  David Lyons’ scenes with Hough are somewhat comical.  But then, with every country radio stations playing the hits, you get some vintage George Straight and then crap, like Brooks and Dunn.

Hallström is like a delightful studio musician.  Keeping everything comfy and similar.  The hits keep coming for Sparks’ adaptations, and there is no reason to assume they will stop soon.   Cheap to produce and very profitable, one can envision the writer and director teaming for quite some time.  It’s doubtful there will ever be a classic in their future together, but there might be something where the praise matches the profits.