Skip to content
Dear John is an end to the relationship between the heart and the brain
2.5 Stars 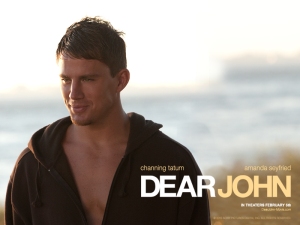 Lasse Hallström directed 26 music videos by the pop band, ABBA.  Amanda Seyfried starred in the wildly successful movie version of the ABBA-inspired Mamma Mia! One would deem this combination of talents a natural progression for each.  The end result is definitely a product that would please fans of both persons’ previous work.  It is not breaking news to say that the works of Nicholas Sparks is like an aphrodisiac for women.  Much like the career of Shane Black (Lethal Weapon 1 and 2, The Last Boy Scout and The Long Kiss Goodnight)for men, movies like Message in a Bottle, A Walk To Remember, The Notebook, and Nights in Rodanthe have, for better or worse, found quite an audience with the gentler sex.

Gentle indeed.  Watching this movie which involves war, fighting and male frustration of many types, I could not help but think I was watching these things as they might appear to a woman.  I cannot say this with any certainty, of course, not being a woman myself.  What I can say is there is a world of difference between the war of Band of Brothers and that of Dear John.  Maybe it’s the slow motion.

Channing Tatum is game for the misunderstood John.  Going through life facing challenges and defending the defenseless.  He always seems to be deep in thought, as if there is something innocent and sad simultaneously that just begs to be understood by a woman…if they could only break through.  His is the rare combination of physicality and silence in acting that should allow for a long career in roles like these and might – if he can break out of this mold – one day lead to something bigger.

Amanda Seyfried is somewhat ineffectual in her role.  She seems a little vacant here, like she is just reciting lines.  When she complains to Tatum, who had been away at war, that he had no idea what she had been through waiting for him, I could only picture her at a beach party.

Henry Thomas makes a pleasant return to mainstream as Tim, the wild card of the story, and the person that everyone can agree to love.  He has been in quite a bit, lately, but nothing I remember since Suicide Kings in 1997.  The role of sad sack is right in his wheelhouse, and he cranks a standing double in the role.

The standout performance for me is Richard Jenkins, who plays John’s dad, a reclusive, simple man who collects coins as his primary method of communicating with his son.  Jenkins comes across as a true person here, not someone rain-manning it up for award season.  Jenkins, a solid character actor for years, has recently been Oscar-nominated for his performance in The Visitor.  Look for a review soon.

There is a general disconnect in this movie between what makes sense and what makes the heart yearn.  This is a consistent theme in Sparks works for me.  It becomes more a series of postcards than a living, flowing work of humanity.  I hesitate to expound on the talents of Nicholas Sparks, because his style just isn’t for me.  Even Sparks most acclaimed movie treatment, The Notebook, was slightly above average for me.  The work is fair, and it only takes a few obvious short cuts, but still it feels incomplete and disconnected.  My wife liked the Dear John, but even she thought it wasn’t the best work of that type.  I would say it is the female equivalent to, say, the second Transformers movie.  I could watch that, warts and all, repeatedly.  She made it through, once.  No bloodshot eyes, no foul.  Not much to write home about, either.