Skip to content
The Rules of The Counselor
3 Stars

The Rules of The Counselor 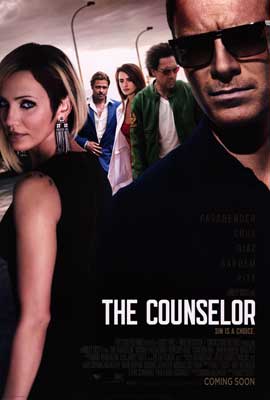 Rule 13: A spec script, or non-commissioned screenplay, is not solicited by anybody.  It must be sold.

Rule 25: A good opening scene, with remarkable visuals and as a bonus incredible sound, gives the viewer hope that they have not taken the first step down the wrong path.

Rule 32: No one in a movie who asks “Are you up?” ever lets the person sleep.

Rule 33: A demonstrative love scene in the first few minutes is pretty much a guarantee the couple is doomed.

Rule 34: White sheets indicate a love that hasn’t been tainted.

Rule 232: Guy watching a girl on a horse prancing with a cheetah is undoubtedly a sign that the grimy stuff being packed at the factory is not girl scout cookies.

Rule 237: Go ahead.  Have the cheetah chase down a rabbit.  It’s never been done before.

Rule 238: With that hair, its doubtful that you remind her of someone else.

Rule 242: Cute chick with the monotone voice saying she doesn’t miss things is a sure sign that she’s not a soccer mom.

Rule 245: It is possible to define women wearing huge diamonds as courageous.

Rule 327: Of course the diamond dealer wants you to understand the flaw in the diamond makes it perfect.

Rule 328: The more one talks about jewelry, the more one realizes they are being sold.  Kind of like a spec script.

Rule 354: Happy sinister couples often make happiness by the misery of others.

Rule 429: “The truth about women is that you can do anything to them except bore them.”  May just mean that you don’t understand the idea of nurture.

Rule 443: When casual conversation becomes more complicated than the end of Matrix Reloaded, then you are losing everyone.

Rule 446: It’s usually not a good film if you use the phrase “One time deal.”

Rule 448: When the conversation turns to how your head will be removed from your body, it’s a good idea to move away from the deal.

Rule 450: The guy peeing for no reason in the desert is usually going to be fodder.

Rule 492: It’s not wise to propose to her if she doesn’t notice the cheetah at the restaurant next to the Piano player.

Rule 659: You are a glory qualifies as a wonderful compliment.

Rule 670: Never trust a woman who can tell you how much your engagement ring is worth.

Rule 671: Conversations about confessing your dirty nasty sins to a priest is not a great sign either.

Rule 698: “You don’t know someone until you know what they want.”  Is redundant.

Rule 845: If you want a good convict, choose someone who hasn’t been seen for years.  Like Rosie Perez.

Rule 866: It is possible to take Michael Fassbender’s personality away and replace it with the name “The Counselor.”

Rule 877: It’s kind of an axiom that opening a dance club is synonymous with being involved in the trade of another kind.

Rule 934: Don’t ever go overboard when trying to intimidate a minor player in the plot, unless you want to use that minor player as your lawyer.

Rule 936:: When making a movie about the drug trade featuring a humorless lawyer, it’s a good idea to not have the guy who played Hank in the series that featured Better Call Saul.

Rule 947: If they show a guy who’s heading out-of-town more than 2 times, the guy will not make it to his destination.

Rule 982: They won’t show the signs of all the disappeared until someone’s disappeared.

Rule 1059: Most will finish watching a film just to see the horribly clever death scene.