Skip to content
The East is inspired nonsense
2.5 Stars

The East is inspired nonsense

The East – 2013 Director Zal Batmanglij Starring Brit Marling, Alexander Skarsgård, Ellen Page, Patricia Clarkson, Jamey Sheridan Screenplay Batmanglij and Marling In the life of a young, independent filmmaker, you only get so many chances. […] 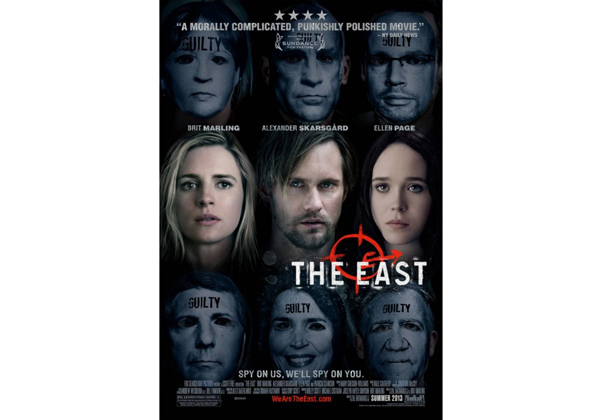 In the life of a young, independent filmmaker, you only get so many chances.  Batmanglij has been working with Brit Marling since they went to Georgetown together.  Their work together has created enough interest with the film The Sound of My Voice (2011) to get them a deal with Scott Free Productions to work on this, a passion project that tries to mix freeganism with political intrigue.  It succeeds at neither, really.  What it does is show that message movies that are unencumbered by the man have just as big a chance to fail on their own, meandering merit as any blockbuster stripped of inspiration.

This is not to say that The East is unwatchable.  Brit Marling is one of the most engaging actresses to come along in some time.  Even when she is acting out her own ridiculous character development, I don’t doubt for one moment that she is feeling and believing every inch of it.  As Jane Owen, an investigator for a private security firm, she must infiltrate an organization known as The East, who have declared war on Big Pharma.  She hangs out with youths whose ideals are bigger than their experience in order to catch on to someone in the group.  Once she does, she hangs out, watches them plot and acts before the group can do damage to her firm’s clients.

We are given the impression that the firm, Hiller Brood, is recruiting from agencies like the FBI.  This works on some levels, but not if one takes into account how easily she falls under the sway of the absurd thought processes of  its members.  In particular, the scenes involving eating in straight jackets and spin the bottle, show the Jim Jones’ type naiveté required to get young people to convert over to their way of thinking.  We see that Jane is not buying into it, but then, as time passes, she begins to see what they are feeling. This does not stop her from trying to prevent them from their heinous acts of retribution, but it does succeed in changing her.  Even so, the only arguments we see of them trying to sway her is dumpster diving and picking up food that had been legally discarded from grocery stores.

Particularly obnoxious is the dinner scene.  There is no way any rational being would put up with the spoon feeding while in straight jackets nonsense.  One question about the sequence is, if everybody is in a straight-jacket, then who gets them all out? Perhaps one of them has that Martin Riggs shoulder dislocation trick.  Page and Skarsgård seem to be play acting their self-righteousness.  Neither hits any notes that have not been drummed out many times before.

Overall, this story adds nothing to the discourse for either freeganism or Big Pharma.  We don’t get enough of either to convince us that the issue is anything more than a plot device.  A pursuit of just one of the lines might have provided some more information or examples to prove a point or make us feel the power of making drug manufacturers accountable or living off the grid without money. Neither premise lacks intrigue, but forced together as some sort of thriller just does not work.

Still, I recommend this film for those who want to experience Brit Marling in her formative years.  We will be hearing more from her in the future as an actress to be sure.  Maybe as a writer, if we are judging from her work outside of this project.  Batmanglij really did not win any points with this film.  If he has another chance – and I am pretty sure he will given his heritage (Iranian) and background (Georgetown) – he needs to concentrate more on what he knows and less on what he wants to convince the world.