Skip to content
Forgotten Gems: Good Morning Vietnam (*****) – When we were young and so alive
5 Stars

Forgotten Gems: Good Morning Vietnam (*****) – When we were young and so alive

The recent passing of Robin Williams was a shock to the world.  In a moment, millions of people clung to their favorite memory.  My own thoughts raced to Good Morning Vietnam.  It was a film that stood out for me in a year that had many great films (La Bamba, The Big Easy, Lethal Weapon, Hope and Glory, Matewan, Moonstruck, Predator, The Princess Bride, Raising Arizona, Robocop, Roxanne, Stakeout, The Untouchables, Wall Street to name a lot). This is a story that only could have been made with Williams as the center piece. In fact, the idea behind the story kicked around for several years (since M.A.S.H. neared its end in the late 70’s and early ’80’s) and it wasn’t until Williams found it, took the bare essentials and brought in his own people to dress it up a bit.

He really didn’t need that much help. After years of alternating between comedies and dramas, his skills were honed into an incredible combination of both in what appropriately became his first Academy Award nomination. Sure, it wasn’t a terribly complex in the story department. It boils down to a funny guy giving some relief to our boys serving overseas in a failing effort to carry out who knows what in Vietnam. There is a terror aspect that might have been more prevalent in the 80’s than the 60’s (not sure about that), and a couple of guys who are put off by him (more on them later) and a whole bunch more that come alive in his very presence. Kind of like the effect he had on all of us.

The story starts out in a monotone sea of sameness. Dan (not yet “The Man”) Levitan (Portnow)  with his droll delivery as DJ for the Armed Forces, is an indicator of what is wrong, but he is not what is wrong. Next thing we see, PFC Garlick (Whitaker) is on his way to pick up some new talent in the form of Williams’ Adrian Cronauer. Lesser actors would have tried to capture the screen immediately with condescending humor or wacky hi-jinks. Years of honing his dramatic talents made it easy for Williams to join the world in a manner befitting someone who knows that he is a star. It’s the subtle build up that makes it so perfect the first time he says those classic titular words.

As Garlick, Forest Whitaker was in the early part of what has thus far been a stellar career.  His portrayal is as a perfect companion for Cronauer.  He’s there to serve, but he is not a fool, except when it comes to starting the jeep.  His chemistry with Williams allows the natural charisma for both to exude.

Two other late great actors gave stellar performances as the nemesis and minion.  Major Dickerson (Walsh) and 2nd Lt Hauk (Kirby) give a one-two punch as a pain in everyone’s ass.  Walsh, in particular, gives a performance that borders on lunatic with his wish to diminish Cronauer’s star.  His eyes gave an edge of evil that offer a real menace that counters the joy of the rest of the film.  Kirby had unique perspective as an actor.  He could be your friend who was unafraid to give you bad news (City Slickers, When Harry Met Sally) or here, he could be the unwitting minion with a heart in the right place, but his head up his ass.

Many of the best  moments of the film are watching Hauk’s reactions to Cronauer’s antics:

Lt. Steven Hauk: First of all, don’t make fun of the weather here, and don’t say the weather is the same all the time here. Because it’s not. In fact, it’s two degrees colder today than yesterday.
Adrian Cronauer: Two degrees colder, me without my muff. 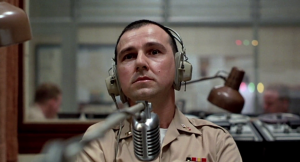 So many minor players in Good Morning, Vietnam have solid, respectable contributions.  Tran and Sukapatana present a respectable face on the native population that often appears as a backdrop to war stories.  Willingham provides a delightfully brash counter to Walsh and Kirby’s indignant postures.  Portnow and Wuhl round out Williams’ team of nice guys that, in lesser hands, would have offered token resistance for no good reason.  Instead, we get a full picture that shows Williams’ Cronauer as genuinely likable, instead of a caricature.

Which brings us back to Williams.  His was a wonderful, varied and courageous career.  In retrospect, this seems like a very safe film.  Vietnam films were the rage in the 80’s, and comedies were never so popular.  Comedies about Vietnam?  That only happened once, unless you count Full Metal Jacket.  The pursuit of this project was as courageous a choice as Williams had ever made.  It was his skill and charm that created a comedy institution that became formula for others (including Williams in Patch Adams) to follow.  His heart is genuine and his laughs come from a place so pure, it made the smiles in the exposition shots stick in your mind.  If I was in the hell that was War in Vietnam, Cronauer would have made my life better, moment to moment.  Like Williams could.

Levinson was in the midst of a nice roll, with Tin Min preceding and Rain Man following this movie.  He had a respectable career, even if he never did reach the heights of this magnificent trio.  His skill is in the simplicity here.  He sits back and lets Williams follow his instincts, which by this point were flawless.

Good Morning Vietnam is my favorite Williams movie.  Even if it is not quite his best performance (Insomnia), this is the film I will always think of when he comes to mind.