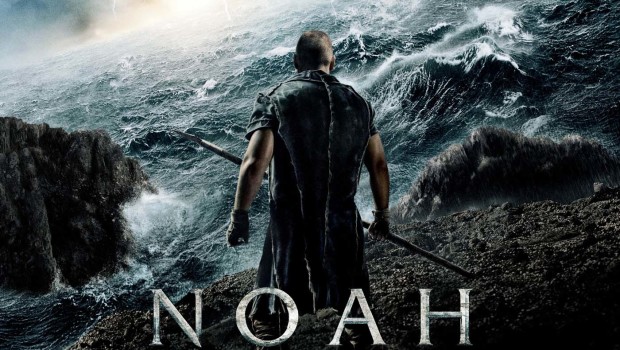 So the first thing about any movie is that it should be entertaining.  As stated in the Bible, Noah’s story is open for a bit of interpenetration, in the same way as C.S. Lewis’ Narnia books.  The first time we hear of the watchers is about 20 minutes after the film.  They are angels that disobeyed God to try to help out Adam.  This is not the disobey that gets you a part in Paradise Lost.  This is the kind of disobey that gets angels turned into nice rock creatures that will eventually helps man get out of the hole they’ve put themselves into.  They’re pretty handy building boats and playing bodyguard against the first chemist with the unfortunate name of Tubal-Cain (Winstone with a bad wig).  Even if it’s between the lines, it is entertaining.

The guy in charge of the boat building is the Grandson of Methuselah (Hopkins in…what may not be makeup by now) and the son of a man slain by Tubal-Cain way back  when he was a kid.  Noah (Crowe) has somehow been granted with God’s gift of being the first environmentalist.  He’s so strict, he doesn’t even let his kid pick flowers that they don’t need.  No bouquets in the Noah household.  The decedents of Seth have been over run by the descendants of his older brother, Cain.  Two of every animal for those who can guess which side Noah’s family falls on.  Near as one can tell, Cain begot some form of slothful conservative, and Seth’s line is nothing but hippies.  The conservatives have burned the land, using it to create tools and weapons.  Eight generations in, the animals and the greenery is almost completely gone from the earth. Really, though, any further into this line of reasoning, and we’ve got a live action (but still animated) version of The Lorax.

Thankfully though, given that this is an Aranofsky film, there are plenty of good things to look at, and better computer generated animals than Jumanji.  But not much better.  The Watchers are interesting, given that they come from a creative place.  The Creator is not called God, and the discussions with Him come from Dreams and consultation with Grandpa Methuselah.  The rock guys make chains to fill in the defensive gaps while protecting the Ark before the big show.

Once we are on the boat, we have a stowaway (again, guess who) and little dividends that take Noah by surprise.  Seemingly, God stops speaking to Noah at this point, and Noah forgets that human life is sacred. Everyone is accepting miracles by now, but Noah turns into the pharaoh.  Just when everyone is about to tear each other apart, the find land without the benefit of the doves.  Did I mention that this occurs within the 40 day period?

Everyone is still pretty pissed at one another by now.  Nothing like starting off the new world right.  That’s melodrama for you, though.  Without it, we would have no actors  in the world to create movies about Noah.

Soon, though, Noah is kissing babies and everyone is a grateful failure.  Somewhere there is a rainbow in the mix. but wait, there is a dove with a mouth full of hope, and grapes to make wine…and a wino out of Noah.  But hey, it’s green again, mostly. Leave it to Hermoine to figure out what the Good book means, well after events have happened to drive the messages home.

There are lots of heavy acting in this take.  Somber drips out of the pores of every character. When all is said and done, the last half of the film is such a downward spiral, it leaves the taste in the mouth that survival of humans might be for the worse of the planet. And that is a wave of agony that is hard to float away from.