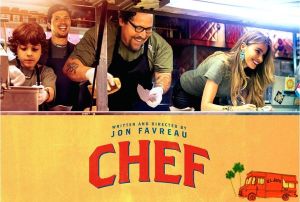 One has only to look at Jon Favreau’s Carl Casper’s delicate handling of a menu that he’s made for no one while his staff makes a 10 year menu for a packed house to realize the not so subtle message he is imparting about his own career. Favreau’s career has reached some financial highs in the last decade or so, moving from Elf to the first two Iron Man films and then Cowboys and Aliens. Mostly the films are good, and they’ve made a load of cash. Favreau, it seems, longs for the days when he made Swingers.

He’s a likable guy, to be sure. Many good actors signed on for what must have been a fraction of their usual wage. Working from an original script that is a little too intentionally clumsy, we get to see Favreau set his co-stars up for laughs at his own expense. He’s been pretty good at this from day one. His humility is his strongest asset, even if it seems like that is his only asset for much of the story. It’s not the only bullet he has in the chamber, though.

Carl Casper is a successful L.A. Chef who used to be an award-winning adventurous risk taker. His success has come with hard work and a steady, unchanging menu. After getting skewered by a reviewer (Platt) he attempts to update his menu, only to run afoul of the owner (Hoffman) and create a viral backlash.  Not understanding how he could benefit from the series of events and really afraid to admit he is not enjoying his life, he finally takes his ex-wife’s advice and moves back to Miami with his son and opens a food truck.

There is a sequence where we see him taking the guts out of an old wretched truck and replacing it. This lasts until the next scene and everything is all shiny and new. It’s strange that Favreau invests the time showing Carl working on the engine and welding, when it adds nothing to the story. We only want to see Carl doing what he loves and sharing that love and some important time with his son (the excellently understated Anthony).

For the most part, the film delivers solid if not spectacular family entertainment. Strangely, they chose to add a bunch of swearing that undercut the potential audience for the film without adding many laughs. There is an emphasis on Twitter and “the digital world” not only to emphasize the gap between Carl and his son, Percy, but to give a vibe of the word spreading, both good and bad through the virtual world. There is no effect so special as seeing Carl and Percy.

The sound track is a pleasant surprise, with some great cross-National original material and a Cuban / New Orleans twist on many great songs, most notably the work of Gary Clark, Jr. and a sing along to Marvin Gaye’s Sexual Healing. The music gathers, just like the menu. They pick up good stuff all along the way, until the menu, like the movie, is filled with their experiences.

The total of Chef adds up to more than the parts. The weaknesses that Favreau has always had he has here. His strengths, though, are still like the best kind of comfort food. It’s his adventure, replete with the minimal spices, excess of butter and lack of panache that wins out in the end. The particulars of this meal may not be memorable, but you will likely not forget the warm feeling it gives.