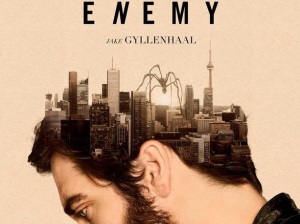 “Chaos is order yet undeciphered.”

Enemy is the kind of film that challenges you to absorb every moment. It’s not enough just to watch this film, you have to feel it. If you keep your eyes on the screen and your ears open to what is being offered, this should be no problem. The story is a dense allegory of a man who finds his doppelgänger while watching a movie. This starts a quest to meet up with his double, which eventually brings him to a new state of consciousness.  Or maybe an acceptance of his subconscious. Where you take it, is up to you.

Gyllenhaal’s performances here are flawless. There is very little to distinguish the two characters, Adam and Anthony, yet for the average viewer, he leaves plenty of breadcrumbs that have nothing to do with what he wears. In a career of brave performances, this could be his finest hour and a half.

Adam is a soft, pliable and initially incurious college history professor who teaches his class about totalitarianism as he wanders through the same activities day after day. Seeing him on a streetcar that moves through the city powered by wires gives a strong sense of where he exists. His girlfriend (Laurent) is more a vessel than a person, it seems, even if she won’t just let him have his way with her.

Anthony is a married man who cheats on his pregnant wife Helen (Gadon).  Hers is a sad existence until she is introduced to Adam, and even then it takes a while for them to really recognize one another. Anthony’s first meeting with Adam is shocking, and Adam runs. Anthony follows him, sees Adam’s girlfriend and senses an opportunity. Where it goes from here may be somewhat expected, but it takes a curve or two.

Villeneuve,  Gullón and cinematographer Nicolas Bolduc take advantage of every word of dialogue, and every inch of the screen. Every scene is replete with images that point the viewer to an understanding of the futility towards which each half of the doppelgänger is heading. It’s impossible to give away anything by telling one to wait for the last shot. Gyllenhaal’s face says it all.

The history of Nobel Prize winning author Saramago’s storytelling has much to do with the message. Interestingly, the film’s primary imaging – the spider – is nowhere mentioned in the book upon which the story is based. The spider couldn’t be more perfectly used, however.

Enemy is worth repeated viewings. Immediately after the first viewing, I started it again. Like a hit record, every note and riff came clearer and more resonant that second time. Try to watch it once. Just try.