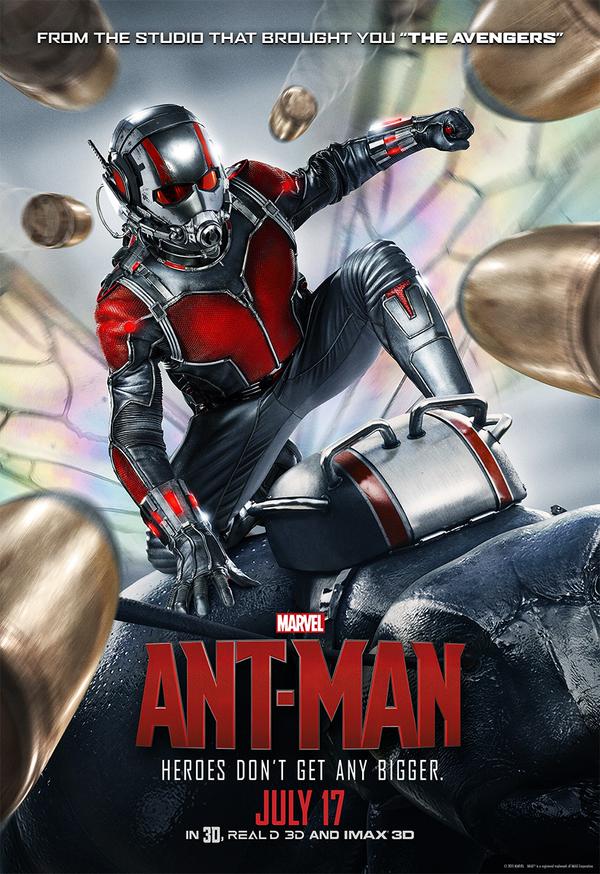 Edgar Wright made, Shaun of the Dead, one of the 5 funniest films I have ever seen. When I heard that he was going to create Ant-Man for Marvel, I was pretty happy. When I discovered that Paul Rudd was going to play the lead, Scott Lang, I thought this can’t get better. It did get better, Lilly and Stoll were going to be great additions.

Then Wright got into a creative row with Feige over the direction and left. Okay. Peyton Reed, he of Down with Love fame, joined, only when Adam McKay could be convinced to do no more than re-write the script a little. Okay. At this point, my enthusiasm tempered a little. The more I thought about it, the more I realised it probably wasn’t going to be all that good even with Wright in charge. Scott Pilgrim vs. The World had been the only film besides Shaun… that I really liked that much. The last 2 parts of the Cornetto Trilogy had failed to live up to the immense expectations of the classic first film. Even if Ant-Man was a passion project, if he left, it might have stunk all along.

Well, that was a mistaken impression. In fact, Ant-Man is anything but a stinker. It is the most fun I have had at the movies since Guardians of the Galaxy. It may even be better than that film. In its simple aspirations, it exceeds either one of the Avengers films, while building on the mythology more successfully than any film but Captain America: Winter Soldier. The story flows effortlessly within and without of the overall initiative. This story gives the Marvel Cinematic Universe the heft it needed after the evacuation of emotion that watchers experienced in the excellent but exhausting …Age of Ultron. This film gives life to the best series of films Hollywood has ever seen during the second of a seemingly endless possible number of phases.

The story starts with Hank Pym (Douglas), circa 1989, meeting with Howard Stark, Peggy Carter and the obviously sinister Mitchell Carson (Donovan) about the Pym Particle. Pym, fresh off the loss of his wife, Janet, is reeling and swears to retire the Particle, along with its benefits, for good. One of these, we find, is the original version of Ant-Man. Forward to present day, we find Scott Lang getting out of prison and moving in with his friend, Luis (Peña). After trying to go straight for his estranged daughter’s (Fortson) sake, he caves into pressure and takes the opportunity to break into Pym’s house and secure the contents of his safe.

Pym, meanwhile, is ahead of the game. He basically arranged for Lang to take the opportunity, so he could convince him to do a job for him and his daughter, Hope. The job: break into Pym Technologies and procure the secret project that Pym’s prodigal protegé, Darren Cross is on the verge of creating.

There is more to this, of course, but I will leave it for the viewer. What the Pym Particle and Cross’ corresponding project does should be obvious to those who can discern the title. There is so much more to this film, though. The world that is created just by going small and then big and then small again is remarkable and many-faceted. To the point which it’s almost a disappointment that they did not explore it more than they did.

They have a story to tell, though. And they nail it. The film works as a heist tale. It works as a coming of age story, a quest for redemption and especially as the journey of an Avenger. Every step of the way feels like the bounce in your feet just before the fastest mile in your life. And you don’t even feel tired when its done.

Every part of the cast works remarkably. Stoll’s Cross is the best villain Marvel has seen since Loki. Lilly is the most fully realized female character Marvel has had in a stable of good ones. Her performance is a delight and very strong in the best possible way. Hope authority is inherent in her character. Her strength couples with Lang’s humility to present a combination unique to superhero lore. Douglas’ performance as Pym is resonant and filled with historical context. Having him tied to late stage Howard Stark and Peggy Carter is a stroke of genius. Peña’s Luis steals almost every scene of which he is part.

This movie is Paul Rudd, through and through. It is the role he’s deserved after a career of being the best part of every film he’s made. He does not waste his moment in the spotlight, and the film is all the better for it. There is heft to the film, but with his performance, it doesn’t have to be an obnoxious weight. If he’s not as serious as Captain America, he is every bit as earnest. Marvel’s Cinematic Universe needs Rudd every bit as much as it needs Downey, Jr. or Pratt.

How much of the overall lightness of being in Ant-Man is attributable to the efforts of Reed, McKay and Wright, or even Feige has yet to be quantified. Even if it never is, I appreciate the difficulty involved in making such an exquisite product. If you don’t enjoy this movie, you really aren’t looking to be entertained.