It would be one thing if the story played a little closer to Hang ‘Em High and a bit less artificially constructed as A Beautiful Mind. The Academy never gave any awards to the first movie, though. The original Glass just wanted his gun back from Fitzgerald. DiCaprio’s Glass has to have a victim-class son to avenge. If that’s not enough, he gets caught evaluating the meaning of revenge at a crucial moment. This is not exciting. This is theatre in the woods. 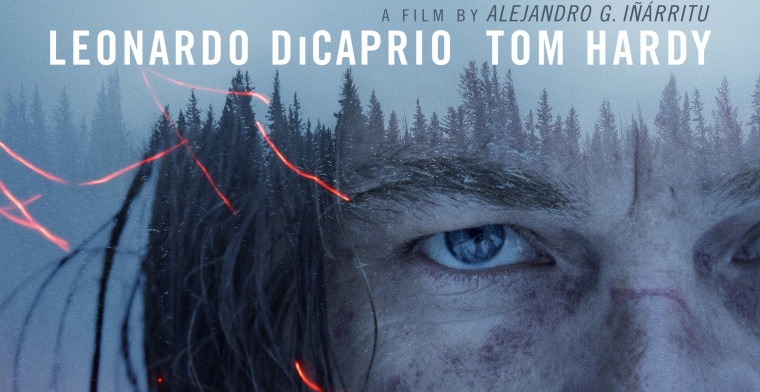 There is something off-putting about The Revenant. The violence, the beauty and the acting is remarkable. The story upon which it is based is remarkable, even if it has less to do with revenge and more a desire to get one’s gun back. The cinematography is without peer. Somewhere, though…somehow, someone forgot to tell someone about the process of hypothermia.

Just about everyone takes an inadvertent dip in freezing water in this story in the dead of winter along the “…ascent of the river Missouri.” Some characters spend a good deal of their time in the rivers and streams, even those who are battling rot from various wounds obtained in a variety of ways. Fires are small and hard to build. Still, everyone just sleeps on through the night and moves out each day; even if they have a big load to carry. For a movie that features perhaps the most shockingly real bear attack I have ever seen, I could not get it out of my head how easily everyone seemed to dry up between scenes.

The story is expounded from the tale told about Hugh Glass (DiCaprio), a  scout, trapper and tall tale teller among those who followed Lewis & Clark out across the lands Jefferson bought from France. These men were the hearty sort. Rugged, bearded and dirty as hell. Each version of Glass, historical and cinematic, acted as a scout for General William Henry Ashley’s corps of some 100 fur traders. Leonardo’s Glass brings along his half-Pawnee son as a fellow scout Hawk (Goodluck) and all-around punching bag for the less enlightened of the crew. Since it is the beginning of the story, we know that his son is the flashpoint for the action. Sure enough, as fast as one can say “where is the mother of those cubs?” Leo is in a position that renders him helpless to protect the boy.

It is no secret to anyone who has seen the cover of the novel or any of the commercials for the film: this is a story of revenge. That Tom Hardy’s Fitzgerald is the one being sought after for said revenge makes sense because he shares billing. That Will Poulter’s Jim Bridger is the other guy around when the shit hits the fan should tell you that he is safe from vengeance. I mean, come on: Jim Bridger.

Leo has many rivers to hide and fall in before he gets his chance at revenge. He also is embroiled in a subplot added to the film about some native and noble Arikara tribesmen who seek one of their daughters who has been kidnapped by some lousy French trappers. We understand: white people are bad, but the French…they are French.

There is a particularly annoying moment in the film that serves to undercut a remarkable sequence that led up to it. Nearing starvation and all sorts of other bad stuff, Glass comes across a wise, noble and gentle Pawnee. The man shows compassion for Glass over many days, giving him food, comfort and medical assistance. Then, one day, Glass wakes up from a cocoon like structure to discover his new friend is gone.

I will leave it to you to find out what the French trappers do to him. Iñárritu doesn’t have them playing scrabble. If he did, it can be assured that the highest scoring words would be “man,” “inhumanity.” “to” and “man.”

This does take away from much of the beauty in Lubezki’s peerless cinematography. Almost each moment of this film feels fresh and makes one feel that they are inhaling crisp, clean air. Sure, there are a lot of scroungy looking guys wearing dead animal carcasses filling up the screen with blood. Beyond that, it’s all so nice and natural looking.

DiCaprio does some of his best acting here. It’s nearly undone by endlessly meandering dream sequences meant to give the already dreary story an even more immense feeling of dread. Somewhere in all of this rich symbolism, a great story turns into an average one.

If I fail to mention much about Tom Hardy, well, he does some decent work here. He’s been better, but he’s rarely been better liked than this year, what with Mad Max making a crazy comeback. His efforts here recall the charisma of Bane in The Dark Knight Rises. In case you are wondering, that’s not a Hans Gruber or Hannibal Lecter range of charisma. It’s closer to say, Robert Duvall in True Grit.

Movies that push reality as an artistic concept are a bit much for this reviewer. People back then ate meat. People in this film pretend to eat meat, and throw it up. It makes things harder to be in the moment when one pictures the actors, directors and their staff all having a lunch back in their decked out trailers that consists of a vegan salad with kale as a highlight.

Maybe that is where they get warmed up and dry before the camera rolls the next remarkable shot.

Let’s not get crazy, though. This is a good movie. It has distractions that keep several aspects from greatness, but it’s worth a once through.

It would be one thing if the story played a little closer to Hang ‘Em High and a bit less artificially constructed as A Beautiful Mind. The Academy never gave any awards to the first movie, though. The original Glass just wanted his gun back from Fitzgerald. DiCaprio’s Glass has to have a victim-class son to avenge. If that’s not enough, he gets caught evaluating the meaning of revenge at a crucial moment. This is not exciting. This is theatre in the woods.