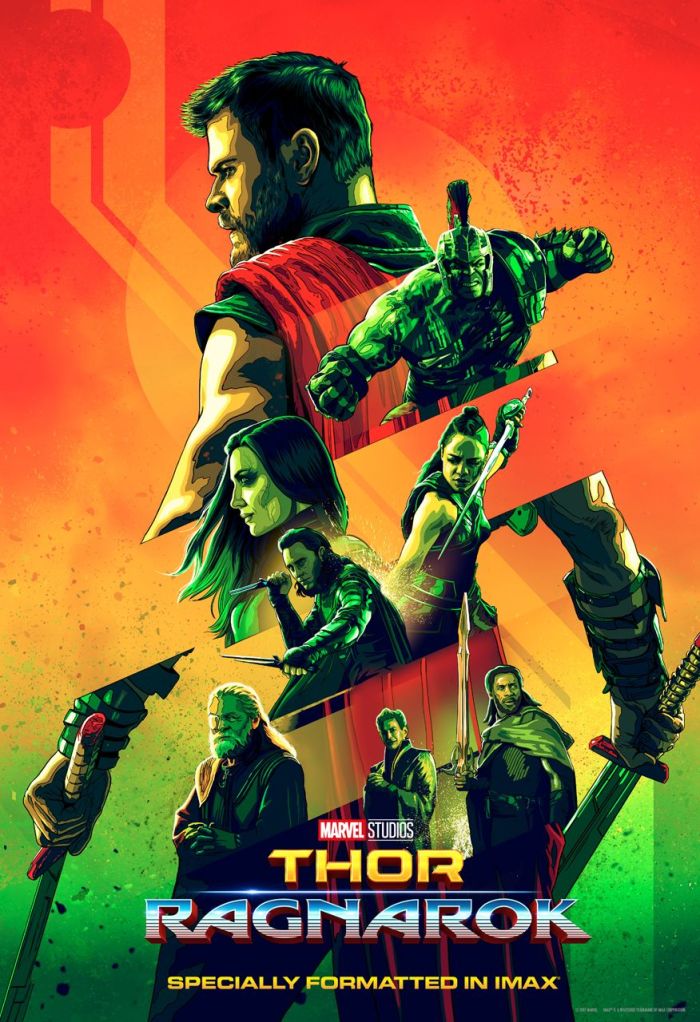 I feel bad for Chris Hemsworth. By the time most of us knew he was funny, we already had seen Guardians of the Galaxy. Now, several years and another Guardians sequel later, we get a humorous movie that’s energy feels borrowed as much as anything.

Thor: Ragnarok is a very good film. It’s got more spectacle than the other two films in the sub series. It’s got more character and it’s much more enjoyable. Sad truth is both Thor films are the least likely to be viewed by most fans because outside of Hiddleston, there isn’t much more to enjoy for those films. Whatever charisma Thor is granted is more than undone by Natalie Portman’s wooden acting. This time, there is nothing holding back the God of Thunder. Except for maybe that thing they have attached to his neck.

After discovering the true location of his father, Thor finds that he is near the end of his life. What’s worse, he drops some info about Thor’s unknown older sister, Hela. Hela (Blanchett) is bad, of course, and powerful as hell. She once had her father’s favor, until her ambition outweighed that of Odin (Hopkins). Then he gave her the Zod treatment.

Hela breaks out and quickly dispatches Thor and Loki into an oblivion called Sakaar which is the home to one of the Elders of the Universe,, The Grandmaster (Jeff Goldblum). Anyone who doesn’t know who he is pitted against here, hasn’t looked at any promotional materials for this film.

The best part of this film is the humor, but if it’s possible to have too much of a good thing, they’ve certainly tried here. So frequent are the jokes, there feel to be no stakes. Perhaps if they’d laid the groundwork at all in either of the previous two entries, it wouldn’t feel so out-of-place. All of the sudden, we have the guy who never gets it, leading with the jokes.

The stakes of this film are pretty high, though. We’re on the cusp of Infinity War, and actions in and around this film look to be contributing directly to its inception. There are several significant losses in this chapter. While no one seems to have time to even ponder the significance of their departures, there are plenty of opportunities for yuks.

These laughs are pretty damn good, though. I can’t thank Marvel enough for letting Jeff Goldblum in the door. His contributions alone are worth more than any of the myriad effects. There is nothing better than seeing him barely scrape the surface of an incredibly powerful character and just make it seem like he’s out for a never-ending good time.

Hemsworth is very good, and his ever developing chemistry with Hiddleston is fun to experience. Knowing that he could have been this same funny guy 2 Thor films ago makes it just q little weird now, but oh well.

Blanchett takes the same doomed baddie and puts her incredible beauty behind it. She seems right at home in this universe and they leave enough ambiguity to make one realize she could be called on later by someone who is in love with The Goddess of Death.

Loki (Hiddleston) is delightful and they give him a variety of things to fail at, until he fights on the right side. Elba is finally given something to do, and he looks gorgeous while doing it.

Mark Ruffalo is here and he spends much of his time outside of Hulk looking perplexed. It fits the theme of someone who was stuck inside the green giant for over two years. Tessa Thompson, as Valkyrie is fine as the lynch pin required to move all of the cosmic tumblers into place. She handles her role with a surprising amount of casual grace.

Waititi is a pleasant enough choice for this film. He adds a gloriously distracting color palette along with a memorable character Korg, who has several of the film’s best lines with a beautiful delivery. His addition of Rachel House as The Grandmaster’s bodyguard doesn’t work for me, if for no other reason than it’s the same annoying character House played in The Hunt for the Wilder People. I am pretty sure I am in the minority of people who found that film a tad overrated. I really can’t tell you anything technical he might have added to the film, because by now that stuff is pretty much handled by the Marvel house. They brought him in for the humor and that’s what they got.

In all, this is a fun film that is as good as one could expect coming from one of the heretofore most boring parts of the Marvel Cinematic Universe. If it feels a bit underdone, it’s because it still follows the formula of megalomaniac who almost has it all until she doesn’t. Marvel has done a great job making their formula interesting, even if the characters (outside of Steve Rogers) evolve at a snail’s pace. If the Marvel movie formula is still stuck in the mode of dragging these characters in and never quite letting them go, well, one can understand why. It’s comic books, man.

The thing that holds Thor back, like with many of their characters, is that nothing really drags him down and out once The Immigrant Song begins to play.