As for me, the best parts of the film, the idea of my thousands of dollars becoming millions and living a life of tiny luxury, are cut short by the reality that Payne never seems to be able to shed himself. It’s really depressing at times. But not as depressing as you’d think. 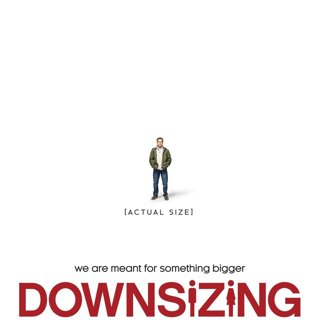 The thing about a movie that conceptually deals with the idea of literally shrinking down to mere centimeters in order to somehow help the living condition could have been pretty funny. And its pretty much guaranteed to have at least one Honey, I Shrunk The Kids type moment where a giant bug chases one or more tiny people in the yard or something. Given that this is Alexander Payne, though, we get a contemplation on existence itself.

Paul Safranek (Damon) is a lower middle class schmo from Nebraska who, along with his wife, decides to take the plunge from average people to opulent small people. This goes horribly, and in the next hour and a half we get to see a veritable study of how life is still potentially miserable and divided into class even when you’re tiny.

That doesn’t mean that the film is horrible, though. It’s actually pretty decent.

Damon seems to have found himself in the Paul Giamatti phase of his career. That he replaced Giamatti for this film is not a surprise. He is subdued to the point of being almost parenthetical throughout the proceedings. Often being rightly described as a stupid man for his inability to bring thought into action. He does take instruction well.

The one giving most of the instructions is Chau, who plays Vietnamese activist Ngoc Lan Tran.  We don’t see her actually protesting in the film. Instead we see her as someone who was jailed and shrunk against her will and now missing part of one leg. Even so, she’s a determined person and a perfect counter to Paul’s former physical therapist who’s always waiting for his moment to arrive.

There is some other nonsense in the film regarding methane gas and an acceptance that the world is going to end at most within a couple hundred years. This is a lot for the mind of a Nebraskan PT to digest, although he does his best to try to understand his place in the whole process.

Tran’s view is a more practical and, it turns out, more hopeful than most of the “genius” minds that want to shrink the future of humanity and put it down in a hole. I can’t tell if it’s her acting or her character that I appreciate the most.

More than anything, Payne doesn’t give in completely to any train of political thought. His version of humanity has revelers (including Waltz and an incredibly well used Udo Kier), workers and the downtrodden. Then there are the really, supposedly smart people who come up with these assured versions of truth that lead them to some cool places at times. Other times, though, what they want to do is capped with a very pathetic explosion.

As for me, the best parts of the film, the idea of my thousands of dollars becoming millions and living a life of tiny luxury, are cut short by the reality that Payne never seems to be able to shed himself. It’s really depressing at times. But not as depressing as you’d think.