It’s a Lifetime film with more accomplished actors, but #HomeAgain is still okay. 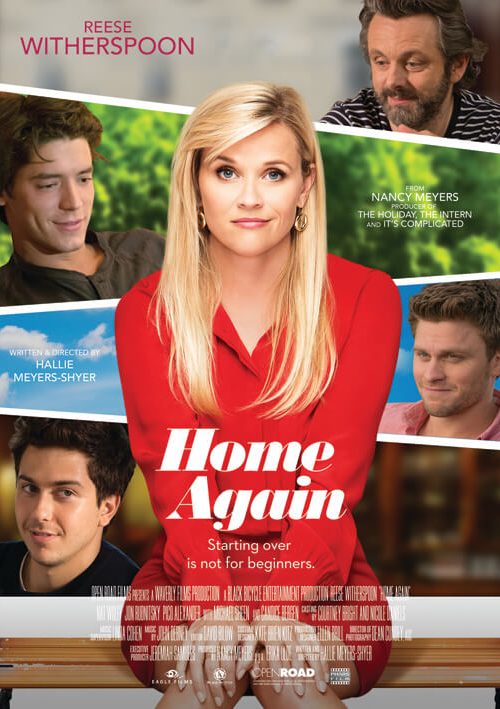 To call Home Again a great film would definitely be a stretch. There is a sense of camaraderie of one’s friends and family helping out the cast. They all seem to be there and having a fun time, but there is a feeling that everyone is going through the motions.

Reese Witherspoon playing a divorced mother of two is remarkably apt casting. There is definitely a nuance she could bring to the role. None of that shows here. What we have instead is a middle-aged woman’s dream come true.

When Alice Kinney’s estranged husband (Sheen) puts off on her decision to follow her back west to Hollywood, she is in a quandary. She was raised as the daughter of a director and an actress (Bergen). Her father passed away several years after being estranged from his own family. It was amicable, and father and daughter had what appears to be a Hollywood healthy relationship.

After a night out with her friends, she ends up with three young handsome men coming home with her. Even though she almost sleeps with one of them, her mother decides they all should stay. It’s a young Hollywood dream team. A young director (Alexander), actor (Wolff) and screenwriter (Rudnitsky) all trying to sell their movie that made it big at SXSW.

They just happened to need a place to stay, you see. They all have a thing for Alice, but they also fit in with different aspects of her life. They are all gentlemen with pure intentions, and they really do help out around the house.

Some parts of the plot work as a study of the filmmaker. Seeing Alice and writer George discussing the career of her father is sweet and interesting. I do wonder what parts of this story come from Meyers-Shyer’s own experiences.Nice as that is to ponder, it falls short in the overall accessibility department.

This might be due to the fact that the plot is blandly accepting of certain aspects of that leave the characters with minimal flaws with which to overcome. Instead, it seems to be more a question of timing when things don’t go as planned. The need to make ends meet or other simple facts of life are nowhere to be seen. Everyone is doing the right thing by their own lives, and waiting on Alice to make up her mind.

It is a sweet film though, with likable characters. It has a good heart, even if it is really lacking any amount of humor beyond the incredibly obvious.

If you’re feeling alright, this film will pass the time. If you’re still looking for Mr. Right while bringing on a couple of kids from Mr. Not as Right, this won’t make you feel any better.