The trick about #Solo is that there are no tricks. There are no moments where you say “Wow, how’d they think of that?” because you know the writers and director never really thought of it, they just incorporated the thoughts of Lucas and company 41 years ago. 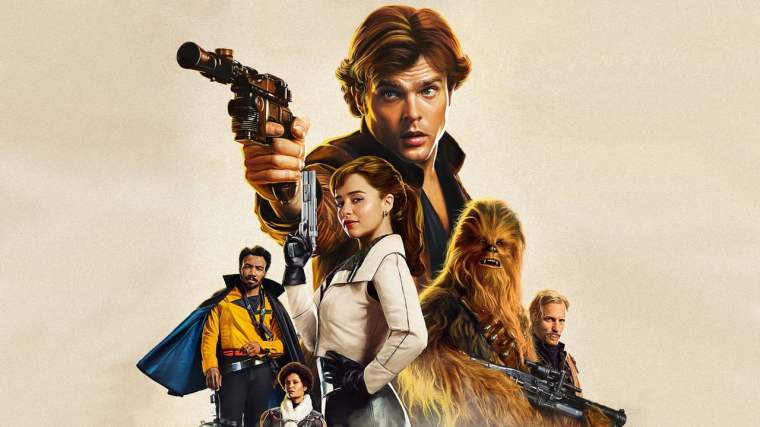 Like most, I had no desire to see a movie about Han Solo that didn’t star Harrison Ford.  When they announced that Kasdan and his son were writing it, my lack of excitement turned to disdain. Hearing Lord and Miller were going to direct it helped a little. When they were fired most of the way through principal photography and replaced by Howard, my hopes plummeted. At the point of the film’s release, I only hoped I was wrong about some of it.

A movie about Chewbacca, maybe from the time he separates from Yoda up until just before he meets Han might have been nice. He at least had stories we’d never heard about. Well other than ripping the arms off of a Gondar.

The trick about Solo is that there are no tricks. There are no moments where you say “Wow, how’d they think of that?” because you know the writers and director never really thought of it, they just incorporated the thoughts of Lucas and company 41 years ago. This would have presented an uphill climb for anyone asked to touch all of these bases in a film. Instead of giving it to a young pair experienced in working their way out of unwinnable boxes, they handed it over to…Ron Howard.

Ron Howard was a good director for many years. Those years have long since passed. He hasn’t done anything I have enjoyed since Apollo 13. That he became lauded after this period says more about the Hollywood press than it does of his skills. If you take the edge off John Nash, you get an Oscar for A Beautiful Mind. The rest is just playing notes, baby.

There is no feeling to the notes being played in this most obvious misstep in the Disney Star Wars era. There is very little to like in this film, and almost nothing to love. It is as forced as the prequel trilogy with even less spectacular visions to feed you along its laborious 2:15 running time. You feel the labor of every minute. You can’t wait for certain characters to find their way off-screen permanently.

Everyone here has done better work elsewhere. Glover has received much praise for his slick portrayal of Lando, but honestly he is shortchanged here. He barely comes close to the Lando of my mind that first graced the screen in The Empire Strikes Back. No matter how cool he seems, he’s stuck in the mud pit of history.  There is nothing that allows us to see him succeed outside of one inspired scene in which he’s not even on camera.

He’s flanked by the most annoying droid in Star Wars history, and that is saying something in a galaxy containing C-3PO. Waller-Bridge’s L3-37 is given the horrid task of making everyone uncomfortable with a #droidlivesmatter movement.  It is an overbearing miscalculation that is kind of insulting, even if the intentions behind it seem good. It’s the kind of crap well that the well meaning but overly comfortable do to show they, too, think about the oppressed.

As if that isn’t bad enough, we’re given strong hints of a physical relationship between the droid and Calrissian. We didn’t need to consider this. In a film that’s supposed to appeal to kids, it only takes away.  The Kasdan’s can hold off on their high-five for SJW. It’s not breaking any new ground to present Lando as overly amorous in 2018. Captain Kirk was working his way through every type of creature in the galaxy in the 60’s.

Clarke, Harrelson and Newton are uninspired at best. Clarke spends her time smiling at Solo with a condescending “I can’t tell you the obvious” look on her face. Harrelson literally tells Solo what he’s going to do. Newton just provides the “we don’t need you in the gang” voice which does absolutely nothing for the plot.

The most shortchanged is Bettany, who plays an absolutely forgettable villain, Dryden Vos. They try to give him character traits. They try to give him cool stuff to have as artwork on his yacht. None of it works to inspire wonder. That this character doesn’t work is not Bettany’s fault. He was thrown in at the last moment in place of an animated character and everything about him seems like an afterthought meant to fill space.

Favreau’s animated Rio Durant is a nice character which would have been nice to see a little more.

Poor Chewbacca is not used nearly enough here. He’s given maybe 20% more to do than he is in a saga film and there is very little to make one feel there is a genuine reason for the bond he has with Solo. It gives a horrible feeling when, towards the end of the story, we see him acting as nothing more than a valet. Maybe if he had an SJW Wookie written into the script…

Ehrenreich is passable as Solo. This film is not his fault. He hits the marks and misses a few, to make things more interesting, presumably. His connection with Chewie is distracted by the presence of Clarke in the story. We never really get to see him invest more than half a thought on the companion with whom he will end up spending the majority of his life. This is bad writing, not bad acting.

One of the big threats in the film, a marauder named Enfys Nest, is given the Kylo Ren treatment. We go through the whole film thinking of the character being presented as a viable threat, only to find out differently when they foolishly take off the mask. Then we have to hear yet another speech.

Howard’s film is marred by a claustrophobia.  This is not in the Falcon, where one might expect. The ship has never been shown to be so expansive. The problems happen almost everywhere else. There are very few scenes that give one the feeling that we’re watching a film made for the big screen. Except at the end, when we get to see Chewie hauling the heavy stuff forward, back, then back again through the desert.

Solo is a misstep, and it could affect the future of the franchise. The concept Kathleen Kennedy has been playing at with all of the stories in between the saga films is actually one Lucas once professed to want to have happen back in the salad days, before he divorced Martha. One gets the idea that there may have been an attempt to bridge together Han of this film along with films for Boba Fett and McGregor’s Obi Wan, with a few other tangents thrown in for good measure. If this happens or not, I will keep watching Star Wars. I just won’t be re-watching this.