#FirstMan “This film is necessary for one to understand the reach of humans. From out of the dark of a life lost so young, hope springs so forcefully. It’s more than a flag that we put on that moon. It’s all of our hopes and dreams.” 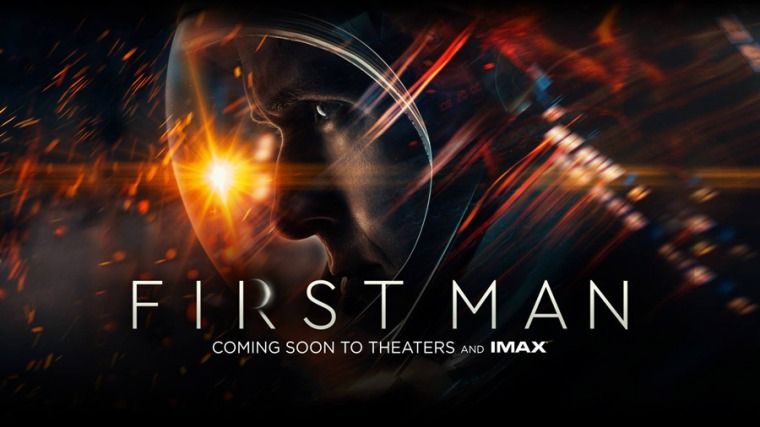 The story of one of the giant human achievements starts off with a life that fails to ever fully launch. Karen Armstrong, Neil and Janet, is suffering from a cancer from which she will never recover. Her death has a profound effect on Armstrong, starting a drive in him that will push him to the limits, where in the end, he makes the simplest gesture.

Of all things to focus on in a feature documenting Neil Armstrong’s historic mission that placed the first human on the moon, Damien Chazelle decides to concentrate on the human heart. It makes sense. After all, it’s the intestinal fortitude of the human heart that pushes the intelligence, creativity and ingenuity that has led us to our greatest achievements.

From the onset we can see the relationship between Neil (Gosling) and Janet (Foy) is struggling. His reluctance to discuss his daughter with her, or anyone, might seem to be a sign of the times, were it not for the variety of personalities exhibited by other men in the film. As he pushes higher and higher, their relationship becomes fractured to the point where it seems sure to break just before his fateful trip.

In Chazelle’s effort to ratchet the tension, the journey through NASA concentrates primarily on the disasters. We see a progression of misery and drive through the failures because, as Armstrong says, “It’s better to fail down here than up there.”

One of the more harrowing experiences gives a good microcosm for the rest of the film. Gemini 8 is supposed to be a crucial mission that has two vessels shooting from earth and then connecting. There is much tension leading up to just the point where Armstrong’s Gemini finds the unmanned Agena target vehicle. Using nothing but a pencil and paper, Armstrong determines its location. Then they have a successful docking.

After spending time connected, a malfunction causes a dramatically increasing orbital roll. This continues after they disconnect from the Agena. They nearly reach a fatal spin, when they stabilize and head back home.

After a brief exploratory session its determined that the mission is enough of a success to move forward to the Apollo project. In reality, there were three more Gemini missions. For purposes of story, those passed by without notice.

The string of failures have lessons inherent within and by the time we get to the 11th Apollo Mission, they are confident enough to move forward. It doesn’t mean they haven’t considered the alternative. If we believe this movie, it almost feels like that’s nearly all they considered.

Still, the film is a remarkable achievement. Chazelle forgoes external shots for more intimate angles that give the viewer a real sense of what these American heroes were facing. It reminds me of the method Fincher uses with Zodiac, where we only see what survivors describe. At heart, this method wins, even if we lose some of the majesty we hope to get from the Imax experience. This also perhaps gives Cinematographer Sandgren a steeper hill to climb to Oscar gold. He deserves a nomination, though, for the simple fact that it feels like the viewer has gone to the moon and back, and barely survived.

The truth of the experience is Chazelle’s goal, and he achieves this in spades. The grand nature of the event is brought to its most human level. Sure the men and women of white America were different then. The inclusion of Gil Scott-Heron’s Whitey on the Moon exemplifies not everyone was on board with the mission. There is a cordiality among the astronauts and engineers that reminds me of the way my father used to interact with his contemporaries. There still were assholes, like Buzz Aldrin. As Gus Grissom requested and typical of the age, everyone did their job.

Gosling fits right into this culture. If anything, he disappears within himself for a significant chunk of the running time. The release is worth it, though. This may be the best of his work so far, even if you have to reach in to see it. Add to this, seeing Gosling so intimately on a large screen allows one to ponder that he has a lazy eye.

Claire Foy is one of the best actresses alive right now. Her ability to ratchet up the tension to severe is complemented by an ability to melt with compassion at the sight of a fellow wife made catatonic. The way she attacks cigarettes gives an excellent view of their real purpose in the lives of the completely overwhelmed. I expect that there will be nominations for Best Actor and Best Actress forthwith.

This film is necessary for one to understand the reach of humans. From out of the dark of a life lost so young, hope springs so forcefully. It’s more than a flag that we put on that moon. It’s all of our hopes and dreams.