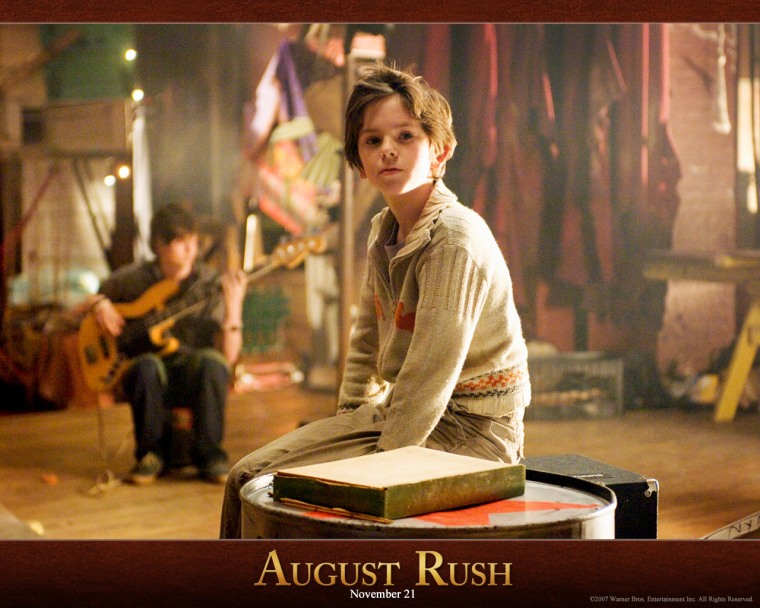 There is an amazing moment toward the end of August Rush, when our wayward protagonist, August Rush, plays a guitar duo with his father.

Neither is aware of their familial connection, yet they do know that there is a connection.  That connection is music.  From early in his life, August, played with blank-eyed wonder and sadness by Freddie Highmore, knew that there was something drawing him to the parents he never knew.

This journey to he takes back to his parents leads him through much heartbreak and sorrow.  Running away from a home for boys where his dreams about meeting his parents through music make him an outcast, he ends up in New York, drawn to a little boy playing guitar on a street corner  After using the last of his money to buy the boy a pizza, he ends up in the care of the Wizard, who is played by Robin Williams in the way I have often pictured him:  somewhat comforting, somewhat disturbingly scary.

A series of flashbacks show us how August’s musician parents met, fell in love (for a night) and were torn apart.  This created a hole in their lives, although not as big as the hole that is left when his mother, Lyla (Keri Russell) is hit by a car and her father (William Sadler) somewhat unbelievably uses the opportunity to get the kid shuffled off as an orphan.

This sets her off to a dreamless, listless life in Chicago, teaching others music, but avoiding performing herself.  His father (Johnathan Rhys Meyers) Louis Connelly quits his nondescript band, goes off to San Francisco, makes a bunch of money doing I am not sure what.  But he ain’t happy either.

Back to August, he has taken up guitar like a real natural, and thusly becomes a money-maker for Wizard, who befriends him, gives him his stage name and pretends to care about his dream of reuniting with his parents.  The reality of the situation grows apparent as the Wizard starts playing stingy with Rush’s appearances.  Eventually the Wizard reveals his true nature, but thanks to a suspicious child welfare worker (Howard) is forced to give August up.  This leads to another musical adventure…and so on.

There are several standout performances in this film, most noticeably is Highmore, who has been a positive presence in some good movies (Finding Neverland) and some bad ones (Charlie and the Chocolate Factory).  The emotions, high and low, Freddie portrays in the film are authentic and understated.  This is a kid that is only happy in the dream that his music will lead him to his parents, and as hard as I thought that would be to portray, he nails it.

Keri Russell and Johnathan Rhys Meyers are very understated in their roles.  They act as though the hands of fate have gripped them and they don’t want to accept anything less than what they know to be in their hearts.  If this sounds cheesy, it is. It is well done, with no Albert Brooks/Julianne Moore-type histrionics in their performances.

Williams, of course, is always a mixed bag.  He manages to combine the best and worst of his acting ability into one believable person…that you would expect to find living on the streets.

Curiously, the tempo and mood of the film is just right.  Being drenched in sentiment is always a risky proposition, but Sheridan handles it masterfully, as her father did in the semi-autobiographical movie, In America, which she co-wrote.

Writer Nick Castle is the same guy that plays “The Shape” in the original Halloween. He has been a good player in the movie biz for years, directing, writing and winning a Saturn Award for The Boy Who Could Fly as well as Directing Major Payne, Mr. Wrong, as well as the hit The Last Starfighter with its reported followup, Starfighter.

The talent that went into making this film is well expressed on all levels.  The only things keeping it from perfect are the unlikely plot turns where a father can make an orphan his adult daughter’s child and where the Wizard claims August as his child and walks him right out of Julliard without so much as one shred of documentation.  These are forgivable sins, when the result is such a feeling of accomplishment.