It’s a nearly classic duo of films waiting for a third.  Rob Zombie’s House of 1000 Corpses and The Devil’s Rejects have a place in the sickened hearts of cult […]

It’s a nearly classic duo of films waiting for a third.  Rob Zombie’s House of 1000 Corpses and The Devil’s Rejects have a place in the sickened hearts of cult followers.  He had something big on the horizon when he was derailed by the quick but unfulfilled success of the Halloween remake and its dud of a followup.  The key to the success of the Firefly films lay in the unfiltered violence and the creation of full-blooded characters that were sociopaths and dangerously funny simultaneously.

Thematically similar to The Texas Chainsaw Massacre, …1000 Corpses derivates in several important ways.  The most important of these is the emphasis on characters, and not showing a preponderance of mindless nutjobs.  The primary characters are Mama and Baby Firefly (Black and Moon Zombie) along with Otis (Moseley).  Baby, in particular, has a sarcastic mix of sexuality and childishness that belies her sadistic underpinnings.  Moon Zombie shows a freedom of conscience that one could imagine developed being raised in a family of vicious murderers.  Otis is harder to peg in the first one.  It’s clear that he is angry, argumentative (with whom, is not clear) and, aside from the fabled Dr. Satan, the most creative of the killers.  Mama Firefly is easily the most grating of the personages, as her routine seems more like that of a cat woman than someone who runs a ship of murderous fools.

At the museum / gas station / chicken shack, Captain “Cutter” Spaulding is a plain old a-hole.  His early dispatching of two robbers could be seen as typical southern justice, which allows some room for surprise.  The element is kind of an outer layer of hell.  You only can pass if you are incredibly dense or foolish.  In this film we have both.

The pace of the film is plodding and filled with dread.  By the time that the 4 kids realize they are in trouble, we’ve seen so many psychedelic flashes of horror (circa 1977) there is no question to us that there will be no escape.  Of course, I would have been gone from the museum the exact moment that Spaulding shows his teeth.  Then once more when I saw that everyone at the house except for Baby had the same type of blackened, horrific teeth.

The law is represented in an incredibly ignorant fashion.  It would seem that if over 1000 people had gone missing in the area, local heat would have a bit more back up when visiting the local creepy farm. The group of B-Movie actors, freaks and geeks littered throughout the film is unprecedented outside of a Tarantino film.  In the last act, we have so many different types of ceremony, it’s tough to tell who is in charge.  This last scene rescues this wrong turn. 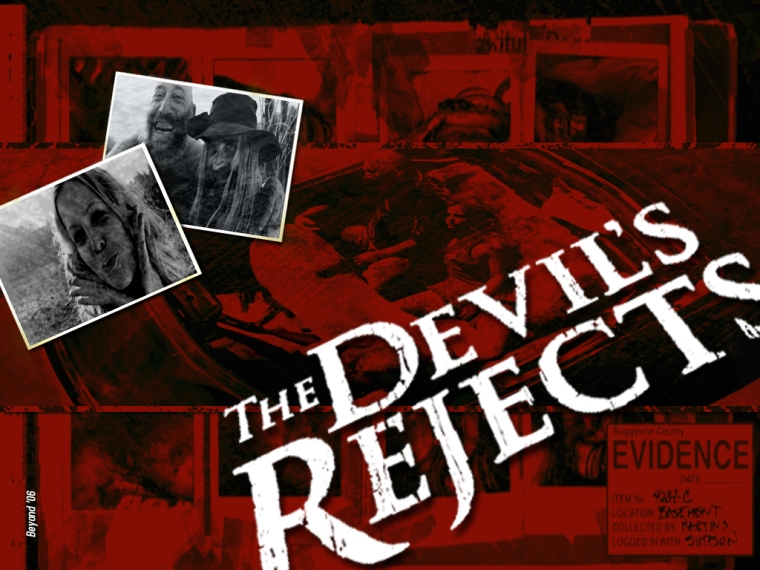 The Devil’s Rejects is such an incredible change of pace (if not tone) that it almost feels like it’s not a sequel.   That is, until you get a good dose of Baby.  Her character is so in tune, it’s like the greased wheel that makes the others drive straight.  Drive this movie has plenty of.  We find out that Otis is more than just angry.  He’s funny as hell.  The role is somewhat a breakthrough for Moseley, who completely owns every scene he is in.  Captain Spaulding is also fleshed out more, resulting not only  in more witty banter, but an awesome dose of those horrendously filthy teeth.

The film balances with the circle of the fugitives attempting to reconnect and the law, represented by the vengeance seeking brother (Forsythe) of the sheriff from the original. He has Mama Firefly, this time played by Easterbrook.  The same maniacal energy, with decidedly better teeth than Black’s version, Easterbrook presents a winsome nutbag with no connection whatsoever to reality.  The sheriff’s brother makes it a duo.  His actions, while entertaining, are so imbalanced that they threaten take the viewer out of the willing suspension of disbelief.  The movie takes a turn that threatens to lead everyone off the cliff.  Into this combustion enters the element of Trejo and Page, as a couple of bounty hunters.

Baby, Otis and the Captain have to keep moving, and with each move, people suffer and die. They have a magical coolness about them, which is engaging as it is intimidating.  As happened in the original, some of the deaths are quick, some of them drawn out, quite cruelly.  One of my favorite character actors from Unstoppable, Temple, suffers cruelly, even after he expires.

The film is at its best with the somewhat frequent, witty banter of the 3 fugitives.  So engaging are they, even after administering some absolute brutality, the viewer forms a bond with them, like the one formed with other anti-heroes from classics like Goodfellas and The Player.  By the end of the film, you are rooting for the bad guys to win.  Every time one experiences the Butch Cassidy and the Sundance Kid-style ending, it’s hard not to hope that they find a way out.  If only so Zombie can make it a trilogy.