There’s virtually no shot at this film winning any awards, and perhaps it doesn’t truly deserve any. Washington’s about the only actor alive that can so eloquently display his faults as a virtue. He’s able to color a little outside the lines of his somewhat limited character, but he knows the point of his character is self-analysis that the others will learn from, so he plays it like he’s doomed from the start. 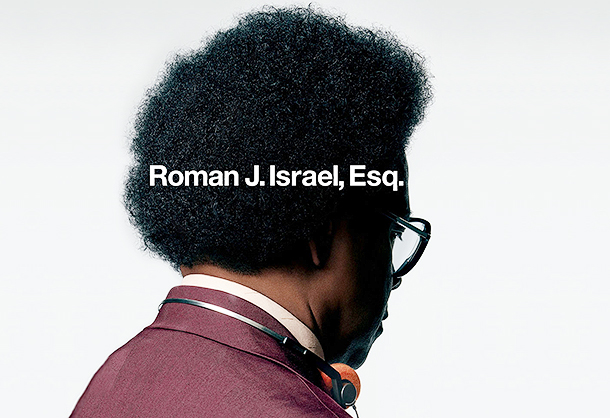 This, is our fork in the road…

Roman J. Israel, Esq. is a man for whom the hard, narrow and treacherous path of righteousness has been his only source of solace for his whole working life. He’s been the silent partner in a law firm with his inspiration and former Law School professor for almost 30 years. Now that his professor has had a heart attack, he has a crisis on his hands.

He gets an offer of employment from another one of his ailing partner’s former students George Pierce (Farrell), but he really wants to do is work with the poor and dispossessed. Unfortunately, he finds during his interview with Maya (Ejogo) that they are all volunteers, so he must accept Pierce’s offer of working in a high pressure and way more successful firm while offering help to Maya when he has time.

One of his first clients provides for Roman an opportunity, and in a moment of weakness, he pounces on that chance to improve his lowly existence. In true Thomas Hardy (the 19th century novelist) form, as soon as he takes the risk, he begins to succeed, while attempting to push his past behind him. His past will not be ignored, however.

Ultimately, Gilroy and Washington do an above average job of hitting every doomed note of the unsung hero, whose miserable life starts to get better while immediately falling down around him. All because…well, he’ll tell you that himself.

To say this is a great film would be stretching it a bit. It certainly is better than the advanced word out of the Toronto International Film Festival. The fact that they cut almost a quarter of an hour out of it didn’t entirely help, if we’re trying to give the motivations of both the protagonist and the two people who end up being disciples of the man he was before he changed.

It’s at this point that the story requires the most willing suspension of disbelief. The script requires us to accept that each of very few interactions with Israel has made enough of an impression with George and Maya as to push them into new heights of dedication to social causes. They dive right in, asking Roman for further words as he clearly struggles for his own inspiration, which is now seemingly out of reach.

The ending, like the rest of the film, relies on a series of exact happenings that give Washington’s protagonist increasingly fewer options. Even so, he’s such an excellent actor, he gives enough grist and flawed good intentions, the story works.

Gilroy and cinematographer Robert Elswit continue the marvelous work they did on the best movie of 2014, Nightcrawler to set a mood of Los Angeles which allows its vast expanse to feel claustrophobic as well as sadly beautiful.

If there is any disappointment to the film it’s that there doesn’t seem to be enough room for the script to acquire peripheral characters that have more dimension than required to push the plot forward. Farrell is as engaging here as I have seen him, but in the end, he feels more a mechanism of the plot than a fully fleshed character.

The same goes for the incredibly appealing Ejogo, whose idealism still has a shred of innocence after years of neglect. She gives the effect of a withered flower, once more opening to a beautiful bloom under Israel’s now eclipsing sun.

There’s virtually no shot at this film winning any awards, and perhaps it doesn’t truly deserve any. Washington’s about the only actor alive that can so eloquently display his faults as a virtue. He’s able to color a little outside the lines of his somewhat limited character. Even though he shows signs of a high functioning autism, he knows the point of his character is self-analysis that the others will learn from. This limits him to acknowledge he’s doomed from the start.

This is why it would appeal to me as a Catholic. It’s a brand that he needs to accept, and there’s no outrunning the shadow, especially if you avoid the truth about yourself.

Gilroy is now in that special zone as an incredibly talented writer and director who is outside of the glow of Hollywood, particularly because he doesn’t rely on the powers that be to fulfill his vision. If anything, this story was a little too well written, as it doesn’t leave much room for the viewer to contemplate how they’d react to the hero, even if the hero knows he’s become a fraud. If the judgement of this film is a little too harsh, it is certainly no crime to write something so well you leave little room for nuance that most scripts don’t have anyway.