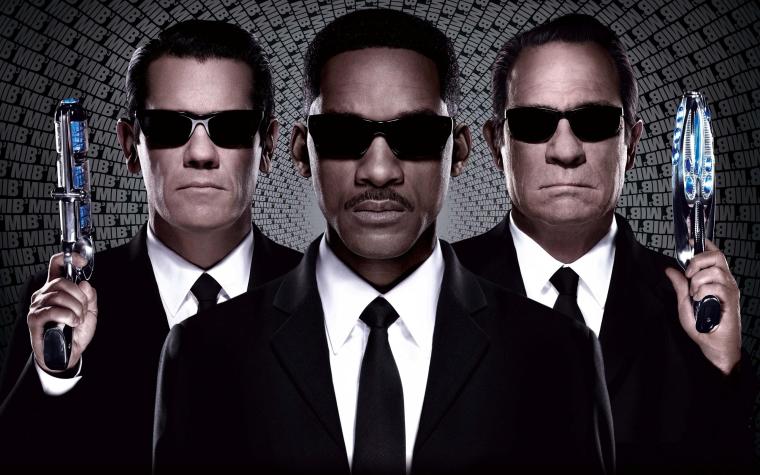 In watching the early trailers for Men In Back III, the most amazing site is the one sight that was not considered a special effect.  That sight was Josh Brolin doing a spot impression of Tommy Lee Jones’ Agent K.  Even looking at the picture above, it is quite plain that there are no attempts at changing the size or shape of Brolin’s face.  It was ball park, and Brolin’s voice acting brought it the rest of the way home.  This gets even better with the viewing of the film.  Given that an admission that he could not do an impression of Jones, he certainly did nail his “interpretation” of the iconic actor.  The most fascinating aspect of the film is any scene involving Brolin.  It’s really a shame and a pleasant surprise to be impatient to get the real thing off the screen so the interpreter can take his place.  This film would had less impact if we only had Jones to fall back on.

The time travel aspect, along with the 13 year gap between films is that we get to see a role reversal with Smith’s Agent J.  So long has we seen Smith as the hip part of any film, to see him as the curmudgeon is another gift.  His old man routine is about the closest thing the MIB series has ever come to subtle.  While he still will be doing the physical stuff for another decade or so, one can see a future for Smith without having to punch aliens in every film.

Another nice character for the film is the presence of Stuhlbarg as the multi-dimensional Griffin.  Playing his character somewhere between Robin Williams and Mr. Rogers, he truly gives one the feeling that he is looking everywhere all at once.  Every interaction with him is fun on a human as well as a sci-fi level.

The bad guy is played by Clement, most widely known for his performance in Flight of the Conchords.  The antagonists in MIB films suffer in that they are surrounded with so many other gruesome characters and big explosions, it really doesn’t matter what they do.  They are just part of the noise.  Let’s just say, for comparison’s sake, Clement’s Boris is somewhere behind D’Onofrio’s Edgar the Bug and way ahead of whatever Lara Flynn Boyle was.

Men In Black III is as close as Sonnenfeld has been to his Get Shorty–Men In Back heyday.  The quirks expressed in the film are as fun as they are harmless.  Just when one feels that the action becomes too real, someone does something to throw off the tension but keep the interest.  This talent has been absent from his efforts for too long.

This talent is matched by the script work of Cohen.  The scope of his story added the interesting elements back to the story that were completely devoid in the second installment.  The characters are emotionally true to what they were in the original, while adding elements that fit perfectly within the foundation that has been laid.  There are situations that at one point seem incongruent (a black commander of Cape Canaveral in 1969?) that vault into something that makes a fair amount of sense in the great scheme of things.

Men In Black III, is a good film.  It has many moments of levity and humor that moves in all directions on the screen.  There are quips, puns, and pretty cool looking aliens.  There is not one ounces of tension, and the sentimentality is forced.  The leaps of logic matched by moments of genius.  All of this is bull crap, but much of it is fun.