Skip to content
The Ocean’s Films: Then, Then and Now
3 Stars

The Ocean’s Films: Then, Then and Now

Hopefully, once they get past the #metoo stain, they can include Damon and the rest of the cast in a future film.

The original film is one of the great “you had to be there” kind of experiences. The camaraderie isn’t forced. One can’t say this about the humor though. Most of it fit the time, when it was more routine to see caricatures serve people with heavy accents and women put up with being told brash insults without a noticeable flinch.

The director Lewis Milestone, won two Oscars several decades earlier (including one for All Quiet on the Western Front), but had most recently done more TV work than anything. The widescreen camera work of William H. Daniels captures the colors of the time as cleanly as if it were from Madison Avenue.

The cast is actually pretty good, aside from Sinatra’s limited performance as the ring leader. One gets the feeling he was more animated and assured off screen than his rascally ringleader. His team, highlighted by Dean Martin, Richard Conte, Sammy Davis, Jr and Buddy Lester provide the combination of grist and charm to make a nice enough counter to the glitz and glamour from whom they’re stealing.

Martin is charming as he performs his hit Ain’t That a Kick in the Head a few times, including in the lounge of the Sahara, which is one or the Casinos they’re nailing. Cesar Romero is delightfully smarmy as the one who has a line on what’s going on.

Overall, it’s a good, but not a great film. Its charm is limited to those who appreciated the individual parts, if not the sum of their work. An extra half-star for that ending though. 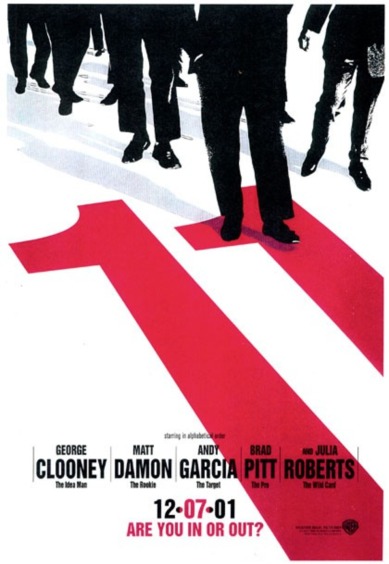 The remake is an exceptional kinetic experience. The casting of Pitt and Clooney is absolute magic. Their chemistry is obvious and the rest of the cast feeds off of it. Except for Matt Damon, who is treated like “the kid” to an annoying extent. Even so, the cast is given relevant and enjoyable tasks that piece together nicely into a clever payoff.

The best of the cast these years later is hard to separate, as they are all great. Eddie Jemison as Livingston Dell is my favorite. I get misty when I realize we will never see the great Bernie Mac in something new. Don Cheadle is extremely agile and potent as explosions expert Basher Tarr. Caan and Affleck are engaging as the ever arguing Malloy brothers. Qin Shaobo is delightful as the contortionist.

Julia Roberts is Tess, the only eye candy in the film. Her presence as a woman may not balance the storytelling scales, but she’s only treated like property by the bad guy. That’s a tacit improvement over the original Ocean’s 11. But it’s a product of its time more than anything.

That bad guy is Andy Garcia as Terry Benedict. His job is to provide a mobster like menace and ultimately come out on the losing end. He does this so well, the movie feels like it will never end when the credits roll. The search will go on.

Back to Pitt and Clooney. This is their film, and it feels organic, like two old friends pulling off a revenge caper that seems impossible on the surface. The feeling that we all assume from the rat pack feels more genuine because it’s obvious they’re friends on and off screen.

Peter Andrews is the name Soderbergh takes when he handles cinematography and this may be some of his best work yet. The energy is constant and genuine and he captures so much subtlety, at least 20% of the film’s jokes are due to camera placement.

This is Soderbergh at the top of his craft and Ted Griffin never came close to doing this kind of work again.

The coolest part about the second venture in the Ocean series is that absolutely no one gets away with the first.  They are tasked with paying it back (with interest) in an impossible time period. Then Reiner’s Saul Bloom decides, for better or worse, he’s had enough. Now down to 10 – but who’s counting – they head to Europe and find that they have been targeted by The Night Fox (Cassell), who set them all up. Why? Because men, that’s why.

Clooney plays it off cool by allowing himself to look the fool early and often. Without Roberts, who appears in a limited capacity early on, he gets to sit back a bit and let Pitt have a second dimension in the form of Europol Agent Zeta-Jones. Their on again off again cat and mouse romance is labored, but works well enough. Damon is relegated once more to playing the butt of Pitt and Clooney’s unnecessary patronizing. It’s the only time their chemistry is ever off.

Fortunately, Damon, Roberts, Caan, Reiner and Cheadle get the chance to deliver a clever subplot with Bruce Willis. It’s one of the cheekier cameos in recent cinematic history.

If the film relied on gimmicks like this, it might be less than it turns out. The addition of Cassell and especially Cherry Jones gives the film more character than expected for such an obvious vacation film.  (They did film this in Italy to be closer to Clooney’s villa.) Cassell’s dance through the laser fields in the great hall is a sheer delight.

There are multiple heists this time. Given this, we find less about the plotting and concentrate on the characters involved. The final competition feels like a cheat, for the fact that it just boils down to who you know, more than any amount of skill. Still, it’s fun enough, if you aren’t surprised that it doesn’t measure up to Soderbergh and company’s first film.

An overloaded sequel that tries to do too much but succeeds at most of it. This time around, it’s personal again.

Gould’s Reuben is taken for a ride by the forcefully named Willy Bank (Pacino) and he has a heart attack. Danny and Rusty take about 6 months to set up a complicated many faceted job that amounts to a bad hard open. I could explain some of it, but I want to sleep sometime tonight.

Suffice to say that everyone gets more than a few things to do this time. The most amusing aspect involves Affleck and Caan’s labor strike in Mexico. The least amusing involves Damon as a manservant who is made irresistible to the no nonsense Barkin, David Paymer’s completely inconceivable Diamond reviewer hellish experience and…Oprah shoehorned in not once, but twice.

Soderberg/Peter Andrews knows how to handle a camera and still gives the scenery a good soundtrack. The dialogue is Altmaneque and I don’t think I could ever get tired of seeing Pitt and Clooney work together. Damon is almost made a full character by this time through and its all well and good until he wears a prosthetic nose.

Bringing back Garcia, Cassell works, even if it’s an early version of the bad guy hanging around long enough to become a good guy. Scott L. Schwartz made it into all three films too, doing unrelated tasks each time. It’s the kind of thing that gives the film a dimension that makes it feel real. And it puts a little smile on your face when you see such an obvious bruiser play against type.

It’s a better film than its predecessor, but not by much. They could have kept making these types of films, but wisely chose to refrain.

It’s not a “We Got Next” kind of film, I suppose. I liked it better than the Ghostbusters

reboot if for no other fact than they acknowledge the players from the other movies. The start of the film is a little too close to the first Soderbergh trip, with Bullock’s heretofore unmentioned sister of Danny Ocean named Debbie facing a parole board.

As soon as she gets out, she sets in motion a plan that she had been working on the entire time she was in the clink. Meeting up with her old friend and partner Rusty Lou (Blanchett), they get on with a plan to steal a Cartier necklace off the neck of an actress (Hathaway) from the annual Met Gala. And if you think that’s the only thing they have going on, I have a necklace to sell you.

There’s a lot to like about this film. It’s well outlined, and I am surprised at what they do with their target. Hathaway is a breath of fresh air that keeps us breathing, even through the laborious Bonham Carter scenes. I think the scum ball babe thing is pretty much played out. I think it’s time to go back to the Merchant Ivory look.

Rihanna, Kaling and Awkwafina feel like they could help pull off a heist and walk on the red carpet. Corden is a nice surprise in the latter part of the film.

This is Bullock and Blanchett’s vehicle, though, and they keep it steady, if not as glamorous as Clooney and Pitt. This is partially due to the director/cinematographer not being Soderbergh, who acts as a producer while Gary Ross and Eigil Bryld take on the roles. They are capable, if unspectacular. They’re also given the unenviable task of having Bullock act opposite a picture of her supposedly deceased brother more than once. Totally sucks the air out of the room.

If they didn’t include that, or Bonham Carter being, you know, Bonham Cartery, the film is good enough to deserve a sequel. Hopefully, once they get past the #metoo stain, they can include Damon and the rest of the cast in a future film.